The Electron; Its Isolation and Measurement and the Determination of Some of Its Properties. 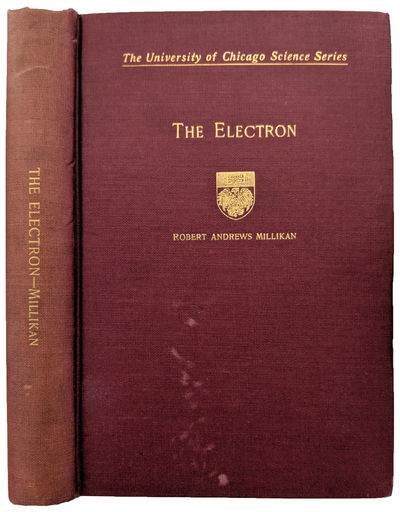 by MILLIKAN, Robert Andrews (1868-1953).
Chicago:: University of Chicago Press, (1917)., 1917. Small 8vo. xii, 268, [2] pp. 5 photographic plates, figs., tables, index. Maroon gilt-stamped cloth; rear inner hinge repaired. Ownership signature and rubber stamp of Lawrence Badash. Very good. First edition. The brilliant American physicist Robert Millikan greatly advanced our understanding of the electron and "developed the oil-droplet method of observation, a classic example of elegant experimentation." Wasson p. 701. He was awarded the 1923 Nobel Prize for Physics for his work on the elementary charge of electricity and on the photoelectric effect. Wasson, Nobel Prize Winners; DSB IX. PROVENANCE: Lawrence Badash (1934-2010) was a professor at UC Santa Barbara and a historian of physics. He was the author of Kapitza, Rutherford, and the Kremlin, and Scientists and the Development of Nuclear Weapons: From Fission to the Limited Test Ban Treaty. (Inventory #: SW1563)
$250.00 add to cart Available from
Jeff Weber Rare Books
Share this item