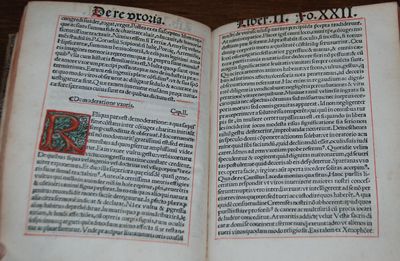 by BARBARO, Francesco
Paris: Vaenundantur in aedibus Ascensianis, 1514. Second edition after the first of 1513. 4to, xxxiii, (1 blank) 11. With printer's device on the title page. Bound in contemporary vellum with marble end papers with blind stamped center-piece with the date "1513" (probably added later). Marbled end papers, upper magin a bit short, occasionally touching the running title, ruled throughout with large woodcut initials colored in red, blue, green and gold. A fine copy. This is a reissue of the first edition of the previous year with the same collation, in which just the subscription of the last leaf was changed. This was edited by French jurisconsult Andre Tiraqueau (1488-1558). Tiraqueau had published his 1513 treatise "De Legibus connubialibus in which he offered a different legal framework for the marriage contract. Index Aureliensis 112.869; Remourad II, p. 144, no. 2; Muller pp 165 & 186; Kelso, p. 333, # 65; Erdmann p. 157. OCLC lists four copies in the US; Folger, Princeton, UCLA, Wisc. This is his treatise on marriage and the role of women. Barbaro was one of the most remarkable men of the 15th century. Born in Venice in 1398, he was elected senator at the age of 21. From 1423 to 1452 he was chief magistrate of Vicenza, Bergamo, Vernona and Brescia, Padua and Friuli. He was appointed ambassador to the Pope in 1426. After being raised to counsellor of state and procurator of St. Mark, he died in Venice in 1454. In addition, he was a protector of science and of learned men and held a correspondence with the greatest scholars of his age. In Book I, Barbaro discusses two key topices: The nature of marriage and the choice of a wife. In Book II, he discusses the duties of the wife to her husband, children and the household. Her main responsibilites being essentially to raise the children and manage the household. "With his emphasis in the De re uxioria on the family as the basic unity of state and society and on the duties of wives in this context, Barbaro created a new literary genre. Aided by his studies of works from Greek antiquity on similar themes, Bararo gave the conventional treatise on family life a new twist. He was to be followed by such famous works as Leon Battoista Alberti's Della familia and Vergio's treatise on the education of children as well as several tracts on matrimony by humanist friends, including Guiniforte Barzizza, Poggio Bracciolini and Giovanni Antonio Campano. But the De Re Uxoria stands as a pioneering work on the subject of love, marriage and family among the aristocratic classes of Europe in the early modern period"[Kohl & Witt, ed, The Earthly Republic. Italian Humanists on Government and Society,(1978), pp. 186-187]. Alberto Lollio (1508-1568) was a native of Florence where he spent nearly his whole life at the Este court in Ferrara where he founded the Accademia degli Elevat in 1540. He wrote numers orations and an important pastoral play:"Aretusa" (1564). (Inventory #: 59133)
$5,500.00 add to cart or Buy Direct from
Second Life Books
Share this item