A SERMON ON I. CORINTHIANS II. 12. PREACHED BEFORE THE UNIVERSITY OF OXFORD, AT ST. MARY'S, ON SUNDAY, ... TO WHICH IS ADDED A SEQUEL, CONTAINING AN ACCOUNT OF THE AUTHOR'S EJECTMENT FROM HIS CURACY BY THE BISHOP OF OXFORD, FOR INDISCRIMINATE PREACHING 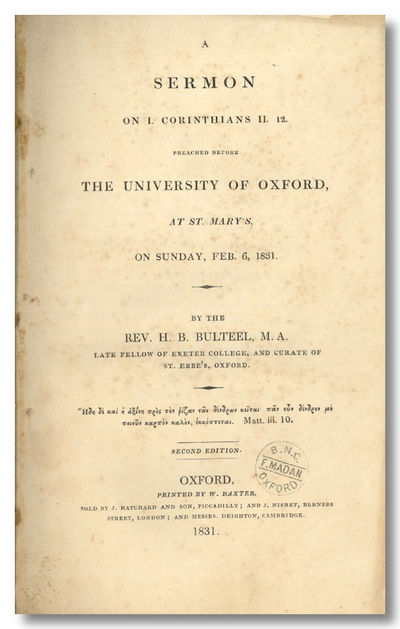 by Bulteel, Henry Bellenden
Oxford, London, and Cambridge: Printed by W. Baxter, Sold by J. Hatchard and Son [et al], 1831. 53,[1]pp. Octavo. Extracted from a nonce pamphlet volume. Title a bit dusty and smudged, scattered foxing, but good, with the small stamp of Oxford bibliographer and collector, Falconer Madan. Second edition of the printed form of this controversial sermon. Bulteel (1800-1866) "adopted High Calvinist opinions, and in 1831 gave a polemic sermon before the university in which he questioned received opinions on free will and salvation, and criticised the university and the Church of England for ignoring the principles of their faith and appointing unsuitable clergy in response to political influence. He then went on an outdoor preaching tour, and as a result was ejected from the Church of England" - Wikipedia. (Inventory #: WRCLIT81829)
$55.00 add to cart or Buy Direct from
William Reese Co. - Literature
Share this item

London : Macmillan and Co. , 1926
(click for more details about SWINBURNE)

THE TOAST OF THE IMMORTAL MEMORY OF QUINTUS HORATIUS FLACCUS PROPOSED AT THE ANNUAL BANQUET OF THE HORATIAN SOCIETY ON 22ND NOVEMBER, 1937

[London : Privately Printed at the Fanfare Press , 1937
(click for more details about THE TOAST OF THE IMMORTAL MEMORY OF QUINTUS HORATIUS FLACCUS PROPOSED AT THE ANNUAL BANQUET OF THE HORATIAN SOCIETY ON 22ND NOVEMBER, 1937)
View all from this seller>