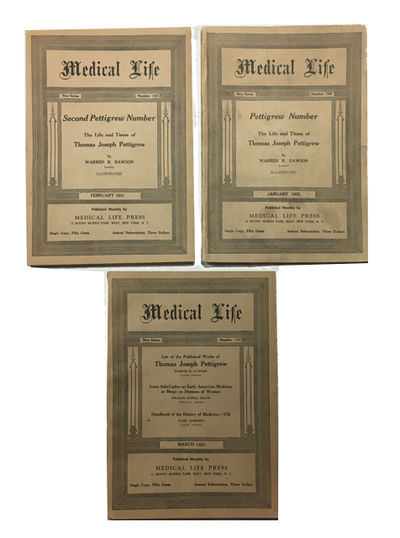 by [Pettigrew, Thomas Joseph]
New York or London, 1921. Very Good. Includes: (1) The Life and Times of Thomas Joseph Pettigrew, by Warren R. Dawson which occupies almost all of New Series, Numbers 124 and 125 plus the first several pages of Number 126 of Medical Life (January - March, 1921. Generally Very Good softcover issues in original wrapper although the first issue has a 1 centimeter tear on fore-edge of most leaves; and (2) a bound volume (with Warren R. Dawson's bookplate and a pencil note indicating that Dawson had received the volume from Pettigrew's grandson) containing: (A) Medical Portrait Gallery. Biographical Memoirs of the Most Celebrated Physicians, Surgeons ... by Thomas Joseph Pettigrew. Part XXV. Memoir and Portrait of the Author. portrait plus 40p. Original wrapper bound in.; (B) Untitled 8-page extract (an obituary of Pettigrew) from Proceedings of the Association (probably the British Archeological Association in 1865); and (C) "Memoir of T.J. Pettigrew, F. R. S., F. S. A.,F. R. C. S." reprinted from The Gentleman's Magazine, No. 1, New Series, Jan. 1, 1866. 12p. Pettigrew, a successful British surgeon, antiquarian and scholar, was sometimes referred to as "Mummy" Pettigrew because of his interest in Egyptian mummies and the process of mummification. (Inventory #: 89033)
$200.00 add to cart or Buy Direct from McBlain Books
Share this item

Tragedy of Pudd'nhead Wilson and the Comedy Those Extraordinary Twins

Hartford : American Publishing Company , 1894
(click for more details about Tragedy of Pudd'nhead Wilson and the Comedy Those Extraordinary Twins)