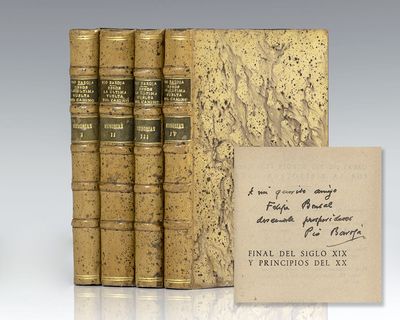 by Baroja, Pio
Madrid: Biblioteca Nueva, 1944-47. First editions of each of the first four volumes in Baroja's autobiography. Octavo, 4 volumes, bound in full calf. The third volume is a presentation copy, inscribed by Pio Bajora to Philip Bonsal. Bonsal was in the foreign service in Madrid at the time, then transferred to ambassadorial duties in South America, eventually becoming US ambassador to a number of South American countries, and the last ambassador to Cuba. Baroja was a key novelist of Generation of '98 and became a committed anarchist and lefty. He was one of Ernest Hemingway's main Spanish influences. His memoirs, of which these are the first four volumes, ceased with the seventh volume in 1949, but by then Bonsal was across the ocean. Pio Baroja was a Spanish writer, one of the key novelists of the Generation of '98. Ernest Hemingway was greatly influenced by Baroja and told him when he visited him in October 1956, "Allow me to pay this small tribute to you who taught so much to those of us who wanted to be writers when we were young. I deplore the fact that you have not yet received a Nobel Prize, especially when it was given to so many who deserved it less, like me, who am only an adventurer." (Inventory #: 67896)
$3,000.00 add to cart or Buy Direct from
Raptis Rare Books
Share this item