All the Sad Young Men. 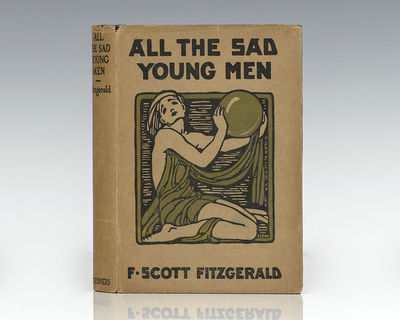 by Fitzgerald, F. Scott
New York: Charles Scribner's Sons, 1926. First edition, first issue of Fitzgerald's third collection of short stories. Octavo, original green cloth. Fine in a near fine first issue dust jacket with the woman's lips unbattered (Bruccolo, A12). All the Sad Young Men is the third collection of short stories written by F. Scott Fitzgerald, published by Scribners in February 1926. Fitzgerald wrote the stories at a time of disillusionment. He was in financial difficulty, he believed his wife Zelda was romantically involved with another man, she had suffered a series of physical illnesses, and his play The Vegetable had been a failure. Upon publication--and somewhat belying the notion that Fitzgerald's most famous novel had not been enthusiastically received--the New York Times wrote, "The publication of this volume of short stories might easily have been an anti-climax after the perfection and success of 'The Great Gatsby' of last Spring. A novel so widely praised -- by people whose recognition counts -- is stiff competition. It is even something of a problem for a reviewer to find new and different words to properly grace the occasion. It must be said that the collection as a whole is not sustained to the high excellence of 'The Great Gatsby,' but it has stories of fine insight and finished craft." Ironically, in a letter nine months earlier, Fitzgerald had advised his editor Max Perkins against publicizing the book through the newspaper. "Rather not use advertising appropriation in Times--people who read Times Book Review won't be interested in me." (Inventory #: 96010)
$6,000.00 add to cart or Buy Direct from
Raptis Rare Books
Share this item