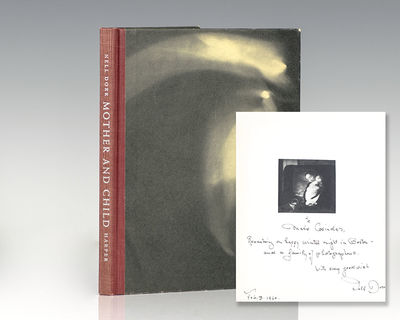 by Dorr, Nell
New York: Harper & Brothers, 1954. American photographer Nell Dorr experimented with a range of photographic techniques including the photogram, macrophotography, negative retouching, and alternative printing processes. During the Second World War, Dorr took up residence in New Hampshire with her daughters and grandchildren whom she photographed extensively. The resultant images were complied in Mother and Child, the exhibition and publication of which was prompted by her grief over the death of her daughter, Elizabeth. The work was featured in MoMA's 1955 world-touring exhibition The Family of Man, for which four of her images were selected by Edward Steichen. (Inventory #: 95106)
$475.00 add to cart or Buy Direct from
Raptis Rare Books
Share this item

London : Hodder and Stoughton , 1919
(click for more details about Rudyard Kipling’s Verse: Inclusive Edition 1885-1918.)
View all from this seller>