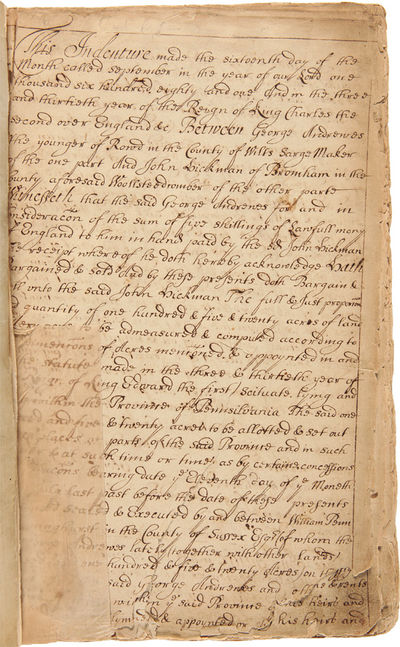 by [Pennsylvania]: [Penn, William]
[N.p., but likely Pennsylvania, 1684. 367pp. Folio. Remnants of cloth spine, still holding firm by cords. Boards no longer present, but marbled endpapers (chipped) remain. A handful of leaves with minor chips or repairs at the fore-edge or corner, costing little text. Good. In a modern half morocco box, spine gilt. A significant early copy book recording the sale of land in an area of Pennsylvania known in the 17th and 18th centuries as the "Welch Tract." This tract covered approximately the area now comprised of the towns of Radnor, Haverford, Merion, Ardmore, and Broomall. The volume contains hundreds of indentures granted by various agents of William Penn to numerous families and individuals both in Wales and in the Province of Pennsylvania. On March 4, 1681, Charles II of England granted William Penn a proprietary charter over land extending west from the Delaware River, and bounded by New York to the north and Maryland to the south. Penn was granted sweeping power over the territory, including the rights to create and fill offices, make laws as he saw fit (provided they were not contradictory to any established laws of England), and to establish counties, towns, and seaports.

Once the charter was signed, Penn hastened to find settlers for the new colony. He offered one hundred 5,000-acre tracts at the price of Â£100 each, as well as several smaller tracts. Seven of the 5,000-acre tracts were sold almost immediately to Penn's Quaker acquaintances in Wales. Seven individuals purchased 30,000 acres of land to the northwest of Philadelphia and proceeded in aiding the Welch Friends in their emigration to America. These individuals formed land companies for the division and sale of the 30,000 acres in the tract. Those companies were granted blocks of land, which each company subdivided and sold to others, and the heads of each company retained some land for himself as well.

The usual size of the company's grants were 5,000 acres, although some tracts were smaller. The original instruments of each patent are in existence today, such as those at Haverford College and in the Friends Historical Library at Swarthmore College. The individuals whose names were connected with these early companies are as follows:

These individuals became, in effect, Pennsylvania's first real estate agents, although it is doubtful that many of them ever visited the land in question. This book records the sale of lands from Richard Davies, Richard Thomas, John Thomas, Edward Jones, and Lewis David. Each indenture records the date of the transaction, the individuals involved, a vague description of the boundaries of the land grant, and the amount paid for the land. The indentures are written in several hands, most likely by the individuals selling the land. Hundreds of individual buyers are named, thus documenting the earliest land transactions between Europeans in this region of Pennsylvania. The earliest indentures were sold in 1681, and the latest sale recorded in the book occurred in 1684. It is uncertain when the indentures were copied into the copy book, but it was most likely very soon after the transaction took place.