Dangling in the Tournefortia. 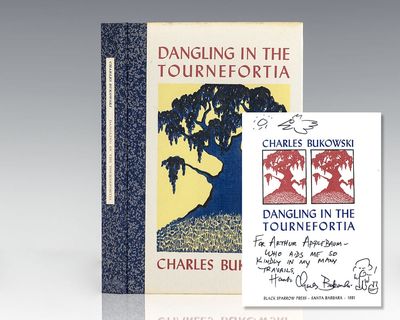 by Bukowski, Charles
Santa Barbara: The Black Sparrow Press, 1981. First edition of Bukowski's classic book of poetry. Octavo, original pictorial boards. One of only 100 numbered copies signed by the author, this is number 89. Additionally inscribed by Bukowski on the title page, "For Arthur Applebaum - Who aids me so kindly in my man travails, Hank Charles Bukowski." Bukowski has also added a drawing of his signature little man with a bottle. With an original acrylic painted portrait by Bukowski bound in and signed, "Buk." In near fine condition. Rare and desirable. German-American poet and novelist Charles Bukowski wrote thousands of poems, hundreds of short stories and six novels beginning in the early 1940s and continuing through the early 90s. Referred to as the "laureate of American lowlife" by Time in 1985, Bukowski's work was defined by the ambient nature of L.A. culture, addressing the experience of the ordinary poor American. Bukowski wrote in detail about his various relationships with women and alcohol, one critic described his fiction as a "detailed depiction of a certain taboo male fantasy: the uninhibited bachelor, slobby, anti-social, and utterly free," an image Bukowski aspired to live up to. Hi gritty poetry is "a natural culmination of the ongoing revolt against formalism, the academic, and the intellectual that has periodically energized American poetry" (Hamilton, 76). In addition to his writing, Bukowski was an abstract painter, painting in a unique style with thick, vivid layers of acrylic, oil and pastel. (Inventory #: 95380)
$6,000.00 add to cart or Buy Direct from
Raptis Rare Books
Share this item