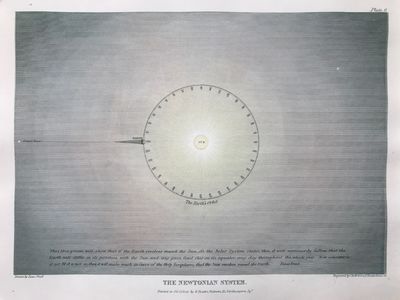 by Isaac Frost
Original Muggletonian Celestial Astronomical Baxter print
The Newtonian System
Drawn by Isaac Frost, Engraved by Clubb, London. Printed in oil by George Baxter.
Plate 6.
This plate shows a circular Earth orbit about the Sun and a distant fixed star. The engraved text reads "This diagram will show that if the Earth revolves round the Sun, as the Solar System states, then it will necessarily follow that the Earth will differ in its position with the Sun and any given ﬁxed star on its equator, every day, throughout the whole year. Now consider is it so? If it is not so, then it will make much in favour of the Ho1y Scriptures, that the Sun revolves round the Earth. Isaac Frost"
The Baxter oil print shown here was made in 1846 for the private use of the Muggletonians, an English religious group that denied a sun-centered solar system. The Muggletonians derived their own view of the universe, and these plates are among the rarest of all Baxter prints, having been made for private use and never widely circulated. Part of a larger set (total eleven prints) made for Isaac Frost's Two Systems of Astronomy, this print was never bound into a book but remained as a loose printed sheet. It is surmised that the others in this series were lost in the London Blitz when the Muggletonian archives were largely destroyed. The Baxter process, a complex and costly printing process produced a spectacular image and the plates are strikingly beautiful. Each Muggletonian astronomical print image measures about 7 3/4 x 10 5/8 inches with decent margins. Condition is very good with the slightest of marginal creasing not affecting image.. Baxter Muggletonian prints are scarce and were unknown to C. T. Courtney Lewis in the first edition of his work on George Baxter.
The plates we have for sale were printed for a work titled, "Two Systems of Astronomy," and were most likely circulated only to members of the sect and not sold as a commercial publication due to the expensive Baxter colour process. These plates were produced to illustrate an alternative to the Newtonian beliefs of gravity and terrestrial and celestial motion and are important in the history of the relationship between religion and science. Our plates were never bound into a book, but were separately published as single leaves. (Inventory #: 20596)
$225.00 add to cart Available from FJ Manasek
Share this item
FJ Manasek
Offered by

The Life of Henry the Fift

London : Blount, Jaggard , 1623
(click for more details about The Life of Henry the Fift)
View all from this seller>