AUTOGRAPH LETTER SIGNED, (2 pages), written on Savage Club, London, stationary. AND WITH SHEET MUSIC for "SOMEONE A LITTLE LIKE YOU." 1951. 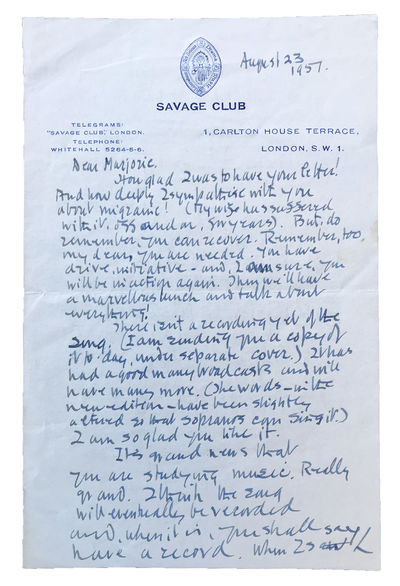 by HOUGHTON, Claude (1889-1961); Frederic CURZON (1899-1973).
London,: August 23, 1957., 1957. Accompanied by sheet music for "SOMEONE A LITTLE LIKE YOU. . . Words by Claude Houghton, Music by Frederic Curzon." INSCRIBED BY THE AUTHOR: "For Marjorie with my love, Claude, August 1951." Housed in quarter dark green morocco chemise-folder with marbled paper sides. Very good. The letter (180 x 115 mm., 1 leaf) reads: "Dear Marjorie, How glad I was to have your letter! And how deeply I sympathize with you about migraine! (My wife has suffered with it off and on for years). But do remember you can recover. Remember, too, my dear, you are needed. You have drive, initiative – and I am sure you will be in action again. Then we'll have a marvelous lunch and talk about everything! There isn't a recording yet of the song. (I am sending you a copy of it today under separate cover.) It has had a good many broadcasts and will have many more. (The words – in the new edition – have been slightly altered so that sopranos can sing it.) I am so glad you like it. It's grand news that you are studying music. Really grand. I think the song will eventually be recorded and when it is, you shall have a record. When I say 'recorded' I mean of course by someone like H.M.V.; but singers have made a recording – . . . and purposes. If I can get one, you shall [have] it. I have a new novel coming out in January. Also another song - of a different kind. It will be a two-part song for women, and will be sung by women's choirs. Of course later it may appear as a "straight" song. It is a lullaby. Lullabies are always written by people who haven't children! Bless you. Look after yourself. Love given, Claude." The identity of Marjorie is a mystery, but she may be either Marjorie Lawrence (1907-1979), a noted Australian soprano, or novelist Marjorie Bowen (1885-1952). Houghton and Lawrence shared an acquaintance, James P.J. Murphy, and traveled in the same literary circles. – Ernest Frederic CURZON (1899-1973), British composer, conductor and musician, known for his "beautifully scored light music." "As a composer he was encouraged both by Sir Dan Godfrey and by Ralph Hawkes of the music publishers Boosey and Hawkes, where Curzon was Head of the Light Music Department. Much of his output was for orchestra, but there were songs of the ballad type like I Bring My Love; In a Little Lane and, published as late as 1951, Someone a Little Like You. For piano, besides arrangements of popular orchestral movements of his own, like The Boulevardier, the march Ceremonial Occasion (written in 1953, Coronation year), the Overture Bouffe for an 18th Century Comedy, the scherzo Mischief (derived from a children's ballet suite Charm of Youth) and the very popular March of the Bowmen, he published other piano movements like a Square Dance Set (1951) and two pieces dating from 1948, Valse Impromptu and Prelude: By the Lyn, for which I have discovered no orchestral counterparts. Also from 1948 was a pleasant Elegiac Melody for cello and piano." Philip L Scowcroft, WebMusic Int'l. [web-source]. (See: Georgetown spec. coll.). Houghton and Bowen traveled in the same literary circles: (See: FORTUNE, Dion. Esoteric Orders and Their Work. 2000, p. 7). (Inventory #: LLV2646)
$175.00 add to cart Available from
Jeff Weber Rare Books
Share this item