The truth shall make you free. The City College, Colombo. Recognized by the Calcutta University. Two minutes from Royal College and four from Pettah Railway Station.. 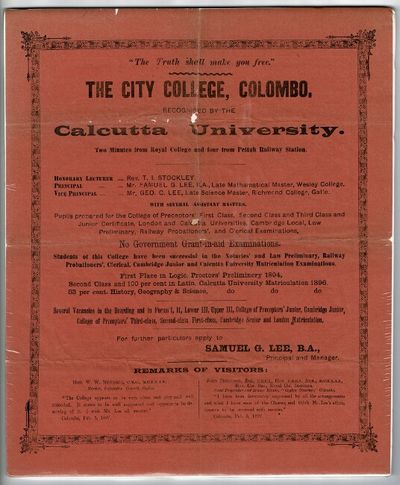 by Lee, Samuel G., principal and manager
Colombo, [Ceylon], 1897. Quarto broadside printed on orange paper within an ornate metal-cut border, approx. 13" x 10Â¾"; previous folds with one small break (not touching any letterpress); all else very good. The broadside notes the honorary lecturer, principal and vice-principal, and assistant masters. "No government Grant-in-aid examinations. Students of this college have been successful in the notaries' and law preliminary, railway probationers', clerical, Cambridge Junior and Calcutta University matriculation 1896. Several vacancies in the boarding and in Forms I, II, Lower III, Upper III, College of Preceptors' Junior, Cambridge Junior, College of Preceptors' Third-class, Second-class, First-class, Cambridge Senior and London Matriculation." City College was founded by Samuel Green Lee in 1894 and by 1906 nearly 1800 students had been admitted. Subjects taught included English, Latin, logic, elementary and higher algebra, arithmetic, geometry, trigonometry, and conic sections and religious knowledge. The students of the institution are trained to grow up as abstainers from intoxicating drinks and narcotics, according to the traditions of Oriental civilization and religions (see Twentieth Century Impressions of Ceylon). Not found in OCLC. (Inventory #: 53339)
$460.00 add to cart or Buy Direct from
Rulon-Miller Books
Share this item