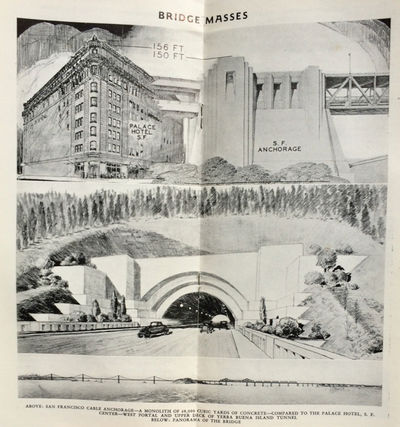 by California Toll Bridge Authority
Sacramento, CA: California State Printing Office, 1934. First Edition. Paperback. Very Good. Pamphlet. 8 3/4 x 4 inches. (20) pp. Illustrated throughout, front cover illustration signed "JR Lee" in the plate; text clean, unmarked with the exception of 2 ink notations in the table on the rear cover. Previous owner rubber stamp of V. F. Estcourt on the front cover. Very Good. This pamphlet was produced prior to the completion of the San Francisco Oakland Bay Bridge, which opened on November 12, 1936, six months before the Golden Gate Bridge. The pamphlet contains detailed information on the construction of the bridge, quantifying the labor hours and materials needed for the construction of what President Roosevelt declared to be the largest single construction job started in 1933. This pamphlet includes extensive black & white line-illustrations of the features of the bridge and the cities it connects. The pamphlet indicates a scheduled completion date of January, 1937, though the bridge was opened in November 1936 ahead of schedule. (Inventory #: GG918-002)
$50.00 add to cart Available from
John Howell for Books
Share this item

by Kathryn I. Rickard

Cobleskill, NY : Kathryn I. Rickard , 1993
(click for more details about My Adventures in Minibiliomania)
View all from this seller>