A Visit To Morin. 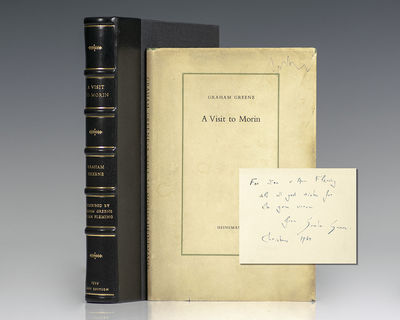 by Greene, Graham (Ian Fleming)
London: Heinemann, 1959. First edition of this short story by the award winning-author. Octavo, original green cloth. Limited to 250 copies. Association copy, inscribed by the author on the front free endpaper to Ian Fleming and his wife, "For Ian + Anne Fleming with all good wishes for the grim season from Graham Greene Christmas 1960." Fleming once named Raymond Chandler, Dashiell Hammett, Eric Ambler and Graham Greene as his primary literary influences. Although Fleming considered the novels in his James Bond series to be classified more as spy thrillers than as literature, he aspired to create "thrillers designed to be read as literature." Greene, himself, divided his work into two distinct categories: 'entertainments', or thrillers with often philosophic edges, and 'novels' on which he hoped his literary reputation would come to rest. The inspiration for much of Greene's 'entertainments' came from his own professional experience in the British Secret Intelligence Service, commonly known as M16, which he was recruited into by his sister and was posted to Sierra Leone during WWII. Fleming is known to have based his character James Bond on Greene's fellow WWII M16 officer Wilfrid "Biffy" Dunderdale, who served as M16's man in Paris and was later a personal friend of Fleming's whom he described as a a man of great character with a penchant for fast cars and pretty women. Near fine in a very good dust jacket with a stray pen mark to the front panel and some smudges. A magnificent association copy between two of the greatest spy novelists of the twentieth century. Housed in a custom half morocco clamshell box. First published in London Magazine, Graham's A Visit to Morin "...tells of a young man's shock at the confessions of a once-famous Catholic writer--confessions that include the loss of religious beliefs, though the writer subtly differentiates 'belief' from something called 'faith' which he claims he still has" (New York Times). (Inventory #: 96133)
$20,000.00 add to cart or Buy Direct from
Raptis Rare Books
Share this item