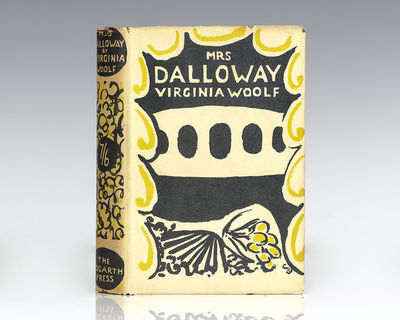 by Woolf, Virginia
London: Hogarth Press, 1925. First edition of one of Woolf's best-known novels, one of only 2000 copies. Octavo, original orange cloth. Fine in a near fine dust jacket with some light wear to the extremities. From the library of Virginia bibliophile and historian Christopher Clark Geest with his bookplate to the pastedown. Housed in a custom half morocco clamshell box. An exceptional example, scarce and desirable in the original dust jacket and in this condition. "In Mrs. Dalloway Woolf breaks decisively with the fictional conventions of the realistic novel. The technique is almost orchestral, introducing and then interweaving the strains of the different characters' thoughts, and finally engineering, through a subtle sequence of readjustments and realignments, a new and delicate harmony between them at the close of the book. Mrs. Dalloway thus initiated Woolf's sequence of radical experiments with literary form, embodying a striking combination of fluid sympathy and secret resistance. Through the novel's rapid transitions between apparently disconnected, but secretly related stories, Woolf was able to suggest the hazards of neatly pigeonholing human character according to social situation or gender" (Parker, 110-11). in 2005 it was included on Time's list of the 100 best English-language novels written since 1923. It was adapted to the 1997 film starring Vanessa Redgrave in the title role. (Inventory #: 99750)
$56,000.00 add to cart or Buy Direct from
Raptis Rare Books
Share this item

by Caro, Robert A. [Robert Moses]

New York : Alfred A. Knopf , 1974
(click for more details about The Power Broker.)
View all from this seller>