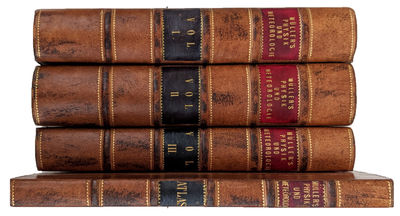 by MULLER, Johann Heinrich Jacob (1809-1875); POUILLET, Claude Servais Mathias (1790-1868).
Braunschweig:: F. Vieweg, 1852, 1853, 1856., 1852. 4 volumes: 3 volumes in 8vo. + Atlas in 4to. [iv], 644, (V)-VIII; [iv], 777, [1]; xv, [1], 520 pp 1404 woodcut figs. throughout, vol. I: 1 table [after p.644], 6 plates (4 in color); vol. II: 1 color plate. Atlas: 27 plates (some in color); some light foxing. Contemporary calf, paste-paper marbled boards, gilt-stamped raised bands and spine black & red leather labels. Rubberstamps of the Royal Society of Edinburgh. Near fine. RARE WITH ATLAS VOLUME. Fourth edition, enlarged (the first to include Kosmichen Physik), of the famous physics textbook of Mathias Pouillet [Elements de physique experimentale et de meteorologie, 1827-30], translated and substantially enlarged and revised by Johann Muller, a physics and technology professor at the University of Freiburg. Muller's version in turn became a standard physics textbook in the German-speaking world, and went through a number of editions, remaining in use through the early 20th century. "Muller's most significant textbook, the Lehrbuch, first appeared as Pouillet's Lehrbuch der Physik und Meteorologie, a 'free adaptation' of the 1837 edition of C.S. Pouillet's Elements de Physique experimentale et de Meteorologie. Muller'sinnovations included numerous woodcuts inserted directly into the text. . .The illustrations of the apparatus were particularly useful for the mechanician. The book was initially styled for the nonphysics major. He supplied the derivations of mathematical formulas and stressed mechanical theorems. Muller incorporated Gauss's works on magnetism for the first time and recast the chapters on galvanism, light, and meteorology. Each of the seven editions that were published during his lifetime underwent considerable emendation. A third volume, Lehrbuch der Kosmicschen Physik, based upon Muller's own observations was added in 1856." –D.S.B. IX, p. 566. (Inventory #: SW1569)
$950.00 add to cart Available from
Jeff Weber Rare Books
Share this item