The Dramatic Works of Moliere. Rendered into English by Henri Van Laun. With a Prefatory Memoir, Introductory Notices, Appendices and Notes. [6 volumes]. 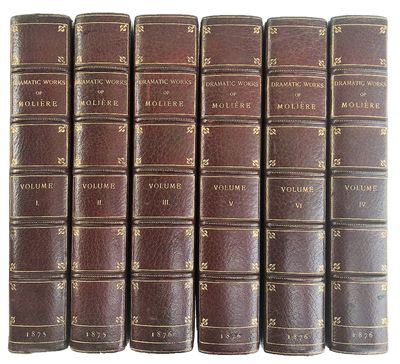 by MOLIERE [pseud. for] Jean-Baptiste POQUELIN (1622-1673).
Edinburgh:: William Paterson, 1875-1876., 1875. 6 volumes. Tall Royal 8vo. 6 frontispieces including a portrait of Moliere and scenes from his plays, 34 engraved plates on India paper. The portrait is an etching by the French artist Adolphe Lalauze (1834-1906) after Nolin. The other illustrations are original compositions by Lalauze. Later half burgundy gilt-stamped morocco, cherry cloth, raised bands, top edges gilt; spine ends on volume I mended with kozo. Rubber-stamp of Paul D. Bremer, St. Paul, Minnesota. Very good. A lovely set, translated Henri Van Laun (1820-1896), one of the eminent scholars of French literature of his time. This highly admired and heavily annotated edition is generally considered Van Laun's Magnum Opus. Sotheran, quoting the Athenaeum, wrote that this is "not only the best translation of Moliere in existence, but the best to be hoped." – Sotheran's Price Current of Literature, CCXI, Jan. 1882. / "Van Laun's translation of the 'Dramatic Works' of Moliere was published in 6 vols. at Edinburgh in 1875–6, 8vo, with illustrations by Lalauze. It embodies much curious information, derived from Langbaine and other sources, concerning seventeenth and eighteenth century translations of, and plagiarisms from, separate plays, acknowledged or unacknowledged." – DNB XX, p. 132. "While at the Edinburgh Academy he made the friendship of Professor Blackie, Lord Neaves, Sir Alexander Grant, Mr. Edmondstone, and many other intellectual celebrities, with the result that he was stimulated to undertake his great work, the translation of Moliere. He brought to his task a knowledge of French and English idiom such as few men possess, a cultivated critical taste, and a vast store of scholarly erudition." – Van Laun's obituary in The Times. (Inventory #: SW1566)
$685.00 add to cart Available from
Jeff Weber Rare Books
Share this item