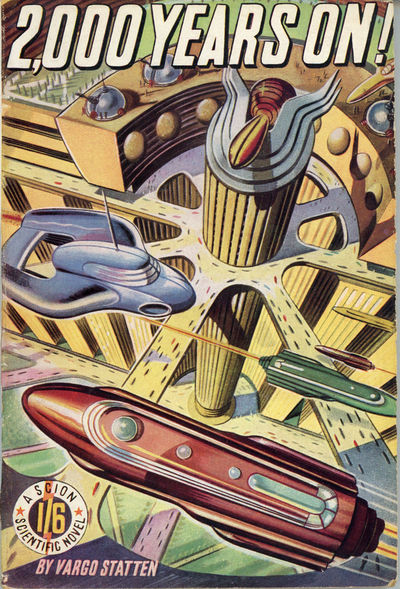 by Fearn, John Russell, writing as "Vargo Statten.
London: Scion, 1950. Octavo, pp. [1-5] 6-128, pictorial wrappers. First edition. "A Scion Scientific Novel" 00. A scientist travels in time to the year 3950 where he finds himself the prophesied ruler of an oppressed Earth and conquered planets: Mercury, Venus and Mars. This super scientific dystopian Empire, founded as a world government on Earth after the 1970 atomic war left civilization in ruins, is preparing to conquer the remainder of the Solar System. The four planets are teeming with malcontents, especially the "workers" building the machines and equipment for the conquest of the outer planets. The workers live on the first 500 floors of mammoth towers. They have "nothing but bitter hatred for those above ... and hatred of ... [their ruler] is greatest of all." "The opening chapter derives from 'Wanderer of Time,' which was published as by Polton Cross in the Summer 1944 issue of STARTLING STORIES." - Harbottle and Holland. Harbottle and Holland A170. Reginald 05344. A bright, nearly fine copy. (#162258) (Inventory #: 162258)
$125.00 add to cart or Buy Direct from L.W. Currey
Share this item
L.W. Currey Inc.
Offered by