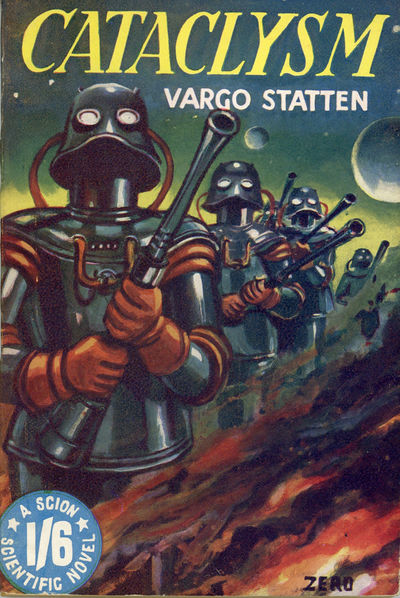 by Fearn, John Russell, writing as "Vargo Statten.
London: Scion Limited, 1951. Octavo, pictorial wrappers. First edition. Scion Books 00. A cosmic space opera in the mode of a Stapledonian scientific romance. The king of the planet Hytro, a super scientific machine utopia, in the constellation of Orion undergoes accelerated evolution to the limit of human intelligence. He creates a new universe to replace this universe which is being devoured by the "Black Terror." He and his queen escape into this new universe as amoebae. History will repeat itself forever. "A fantastic interstellar adventure involving the destruction of this universe and the creation of another, CATACLYSM! is a much-expanded and rewritten version of the plot in 'The Devouring Tide,' which first appeared in THRILLING WONDER STORIES, Summer 1944, as by Polton Cross. One of the best Statten novels." - Harbottle and Holland. Harbottle and Holland A131. Reginald 05305. A fine copy. (#162256) (Inventory #: 162256)
$100.00 add to cart or Buy Direct from L.W. Currey
Share this item
L.W. Currey Inc.
Offered by