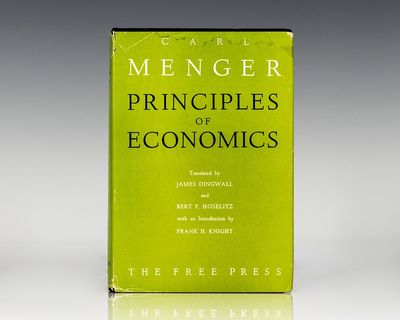 by Menger, Carl
Glencoe, Ill: The Free Press, 1950. First edition in English of Menger's magnum opus. Octavo, original cloth. Translated by James Dingwall and Bert F. Hoselitz. Introduction by Frank H. Knight. Fine in a near fine dust jacket with light rubbing and wear. First editions are uncommon, especially in the original dust jacket. "Menger's Principles of Economics is the founding document of the Austrian school of economics" (Caldwell, Hayek's Challenge, 19). "If, during the last 60 years, the Austrian School has occupied an almost unique position in the development of economic science, this is entirely due to the foundations laid by this one man... its fundamental ideas belong fully and wholly to Carl Menger" (Hayek, Introduction to 1976 edition). "Major economists usually leave a legacy of ideas and theories that come to be accepted... A few make their mark because they dared to step outside the mainstream and were able to inspire a group of students or followers. Menger is the rare figure who fits into both categories. His emphasis on the individual, and his argument that we must explain the economic world as responses to subjective individual assessments, make Menger a founder of the Austrian School of Economics" (Pressman, 63). (Inventory #: 68001)
$3,000.00 add to cart or Buy Direct from
Raptis Rare Books
Share this item