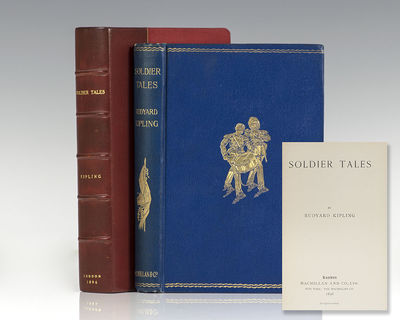 by Kipling, Rudyard
London: Macmillan and Co., Ltd, 1896. First edition of Kipling's collection of soldier tales. Octavo, original cloth with gilt titles and pictorial gilt tooling to the spine and front panel, gilt ruled, all edges gilt, frontispiece with tissue guard, illustrated with engravings. In near fine condition with a touch of wear to the crown of the spine. Housed in a custom half morocco and chemise case. A bright example. Kipling was born in India, which inspired much of his work and his innovative stories for children have become timeless classics. He became one of the most popular writers in the British Empire, in both prose and verse, in the late 19th and early 20th centuries and was awarded the Nobel Prize in literature in 1907. Kipling's Soldier Tales include With the Main Guard, The Drums of the Fore and Aft, The Man Who Was, The Courting of Dinah Shadd, and The Madness of Private Ortheris. (Inventory #: 96105)
$750.00 add to cart or Buy Direct from
Raptis Rare Books
Share this item

Field Guide to the Birds: Giving Field Marks of All Species Found in Eastern North America.