A LIFE OF MATTHEW FONTAINE MAURY, U.S.N. AND C.S.N. AUTHOR OF ‘PHYSICAL GEOGRAPHY OF THE SEA AND ITS METEOROLOGY.' 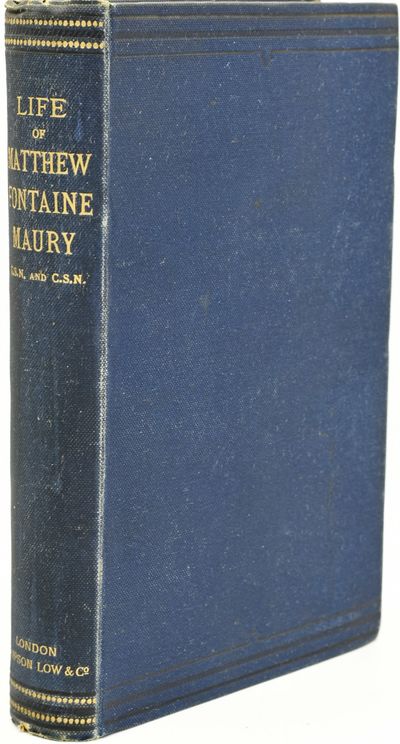 by Diana Fontaine Maury Corbin
London: Sampson Low, Marston, Searle, & Rivington, 1888. First Edition. Hard Cover. Very Good binding. First Edition of Diana Fontaine Maury Corbin's Life of Matthew Fontaine Maury. Called the Father of Modern Oceanography, Maury charted ocean currents and winds, and published numerous works on naval meteorology and oceanography. During the Civil War, he served for the Confederacy. Portrait frontispiece. Previous owner's name on the title page, of John Mercer Brooke, who worked with Maury at the United States Naval Observatory for many years. They worked to chart the stars and sound the ocean floor, and Brooke would make his name by inventing a deep-sea sounding device used until modern times. Nevins notes that this book is notably partisan, and not well written, but that it "reproduces Civil War correspondence not published elsewhere." Shelfwear. Blue cloth with gilt lettering. Very Good. (Nevins I, 221). Very Good binding. (Inventory #: 286906)
$300.00 add to cart or Buy Direct from
Black Swan Books
Share this item

THE HISTORY OF MULLINS

Spartanburg, South Carolina : The Reprint Company Publishers , 2000
(click for more details about THE HISTORY OF MULLINS)