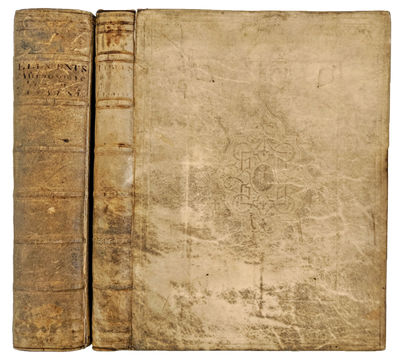 by CASSINI, Jacques (1677-1756).
Paris:: L'Imprimerie Royale, 1740., 1740. 2 volumes. 4to. xvi, [12], 643, [1]; xiv, [6], 120, 222, [2] pp. including errata. Woodcut arms of the Bourbons on titles of both volumes, engraved vignette of the Paris Observatory by Henri Simon Thomassin (1688-1741), and 26 folding engraved plates (5 by engr. by Simonneau). Contemporary blind-stamped vellum, ornamental devices on front and back covers; hinges weakened, covers slightly soiled, some interior browning, otherwise an excellent set, with some pencil marginalia [v.II, p.50] and a leaf of notes in manuscript outlining further corrections to the tables. Very good copy. FIRST EDITION. The Elements is Cassini's most valuable contribution to astronomy. Based on years of observations Cassini made as director of the Paris Observatory, it covers theories of the sun and moon, fixed stars, motion of the stars, and descriptions of the planets, including Saturn's rings and Jupiter's satellites. The tables in the second volume were so accurate that they were used by astronomers long after the book went out of print. "An ardent opponent of Sir Isaac Newton's gravitational theory, he continually defended his father's work; but he was unable to reconcile his observations with his father's theories." – Britannica. "In astronomy proper Cassini's work is vast. Besides working patiently as an observer and directing frequently effective work while head of the Paris observatory he published a great number of memoirs in the Histoire de l'Academie and two books on astronomy (1740): a collection of tables and a manual. Cassini's principal areas of interest were the study of the planets and their satellites — particularly the inclination of the orbits of the satellites and the structure of Saturn's ring — the observation and the theory of the comets, and the tides. "Certainly these fields yielded valuable observations, particularly, in 1738, the revelation of the proper motions of the stars; the presentation of improved instruments and of several new methods; and some original hypotheses of limited scope." – DSB III, pp. 104-105. REFERENCES: Houzeau & Lancaster, I, pt. 2, 9251, 12793; Lalande, pp. 411-12; Poggendorff, I, pp. 390-391; Barchas 361 & 362. (Inventory #: RW1030)
$2,000.00 add to cart Available from
Jeff Weber Rare Books
Share this item

Birmingham, AL: : University of Alabama Press, 1968, 1994. , 1968
(click for more details about Rare Books and Collections of the Reynolds Historical Library. A Bibliography.)
View all from this seller>