A Treatise on Magnetism, Forming the Article Under that head in the seventh edition of the Encyclopaedia Britannica. 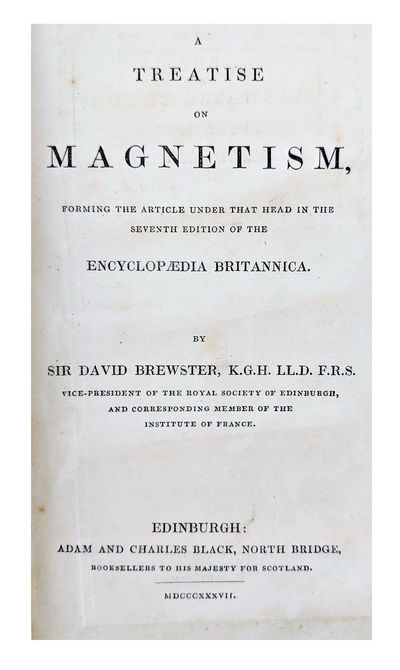 by BREWSTER, Sir David (1781-1868).
Edinburgh:: Adam and Charles Black, 1837., 1837. Tall 12mo. viii, 365, [3] pp. Frontis. folding map, 106 figs. Green gilt-stamped cloth; upper cover stained. Armorial bookplate of Mattw. Paul Moyle. Very good. Separate edition. "The chapters on terrestrial magnetism and magnetic instruments are of special interest." – Wheeler Gift. Provenance: Matthew Paul Moyle (1788-1880), meteorologist and writer on mining, was born at Chacewater, Cornwall, 4 October 1788, and educated at Guy's and St. Thomas's Hospitals. "He became a member of the Royal College of Surgeons in 1809, and was afterwards in practice at Helston in Cornwall for the long period of sixty-nine years. A considerable portion of his practice consisted in attending the men accidentally injured in the tin and copper mines of his neighbourhood, and his attention was thus led to mining." – Wikip. Bakken p.153 [1838 issue]; Ronalds p.80 [1838 issue]; Wheeler Gift, I, 1197 [1851 ed.]. (Inventory #: RW1021)
$100.00 add to cart Available from
Jeff Weber Rare Books
Share this item