The Life and Letters of Charles Darwin, Including an Autobiographical Chapter. [3 volumes]. 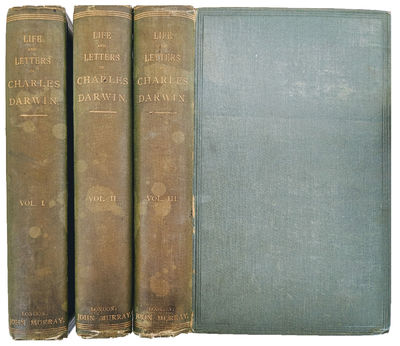 by DARWIN, Charles (1809-1882).
London:: John Murray, 1887., 1887. 3 volumes. 8vo. ix, [1], 394, [4]; [iv], 393, [3]; iv, 418, [2]. Frontis. portraits, index, ads. Original bluish-green blind- and gilt-stamped cloth; spine ends rubbed. Armorial bookplates of Hugh Macdonald Sinclair, ownership signature of C.S. Sherrington. Very good. SIR CHARLES SCOTT SHERRINGTON'S COPY. Second edition. Fifth Thousand. Includes a broad selection of letters to 28 different recipients on a variety of topics, selected by Darwin's son Francis, who was "largely guided by the wish to illustrate [his] father's personal character." Topics include Darwin's early life, "The Foundations of the 'Origin of Species", botanical letters, and many others. Correspondents include Louis Agassiz, H. W. Bates, Thomas Henry Huxley, Asa Gray, and others, along with various family members. PROVENANCE: Sir Charles Scott Sherrington (1857-1952) was an English neurophysiologist, pathologist, and bacteriologist who won the NOBEL PRIZE in Medicine in 1932 for his work on the function of neurons, and served as president of the Royal Society in the early 1920s. Hugh Macdonald Sinclair (1910-1990), was a doctor, medical researcher in nutrition and Master of the Worshipful Society of Apothecaries. He was best known for his lifelong crusade against "bad fats", which he believed to be a primary cause of cancer and heart disease in developed countries. (Inventory #: RW1042)
$850.00 add to cart Available from
Jeff Weber Rare Books
Share this item