Lumen. Authorised translation from the French by A. A. M. and R. M. With portions of the last chapter written specially for the English Edition. 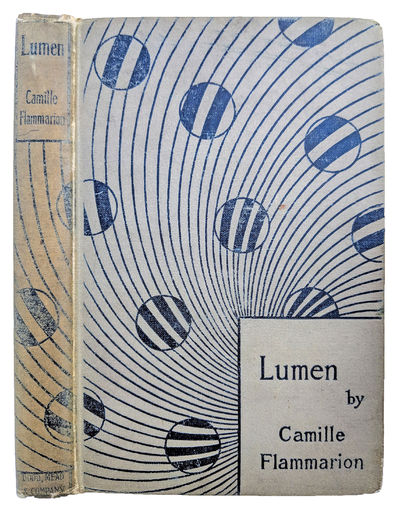 by FLAMMARION, Camille (1842-1925).
New York:: Dodd, Mead, 1897., 1897. Sm. 8vo. vi, 223, [1] pp. Gray black printed cloth. Near fine. First Dodd, Mead edition. A seminal work of what today would be called science fiction, Lumen relates the meeting of a man with an extraterrestrial who is capable of projecting his soul across the universe at hyper-relativistic speeds. The alien describes various modes of life found throughout the galaxy. / Reviewed in 1898, in part: "Knowing that a mass of dry detail would only defeat the end [Flammarion] bit upon the idea of speculating ingeniously about the forms of life peculiar to some of the dark companions which follow in the trains of monstrous suns. For characters he had 'Quaerens' and 'Lumen.' Lumen had not long ceased to be an inhabitant of our earth. After his death he found himself able to travel across inter-stellar space with a rapidity exceeding that of light. . . " – The Literary World, Volume 57, January 7, 1898, p. 15. (Inventory #: RW1066)
$60.00 add to cart Available from
Jeff Weber Rare Books
Share this item