Fontenelle's Dialogues of the Dead, In Three Parts. I Dialogues of the Antients. II. The Atients with the Moderns. III. The Moderns. Translated from the French. With a Reply to Some Remarks in a Critique, call'd The Judgment of Pluto, &c. And Two Original Dialogues. 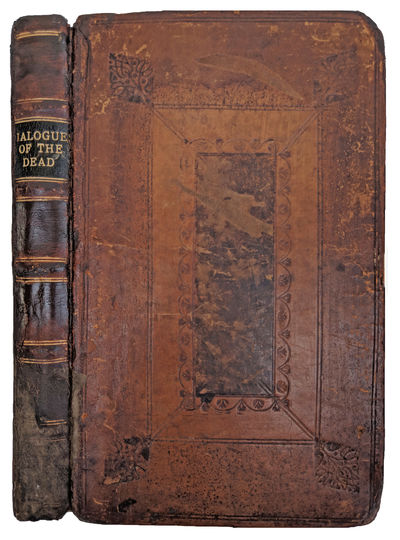 by FONTENELLE, Bernard Le Bovier (1657-1757).
London:: Jacob Tonson, 1708., 1708. Sm. 8vo. [ii], l, [2], 209, [1] pp. Original blind- and gilt-stamped calf, later gilt-stamped black leather spine label, raised bands; rebacked, preserving original spine, inner joints reinforced with brown cloth tape, covers splitting at pp. 62-63, upper cover scratched. Embossed ownership stamps of S. G. Morten [heraldic bearing: crowned eagle, wings raised]. Good. Early edition in English, of the author's Nouveaux dialogues des morts. Fontenelle was one of the earliest authors of "popular science" texts. While not much of a researcher himself, he found great success expounding the discoveries of his contemporaries in such a way that a broad audience could make sense of them. In his own time his popularity as an author among educated French society was second only to Voltaire, and he was in fact "described by Voltaire as having the most universal mind produced by the era of Louis XIV" – Britannica. Fontenelle's Dialogues of the Dead was very popular at the time of its publication, and the basic conceit of the book is still employed by authors today. In the work, Fontenelle imagines dialogues between great minds of various eras, such as the philosophers Socrates and Montaigne or the physicians Erasistratus and William Harvey. This allows the imagined speakers to present their views in a naturalistic way, making them much more palatable to lay readers who might have difficulty sloughing through more scholarly works like On the Motion of the Heart and Blood in Animals. ESTC T139460. (Inventory #: RW1077)
$450.00 add to cart Available from
Jeff Weber Rare Books
Share this item