Evolution Emerging, A Survey of Changing Patterns from Primeval Life to Man. A Collaborative Work of the American Museum of Natural History and Columbia University. [2 volumes]. 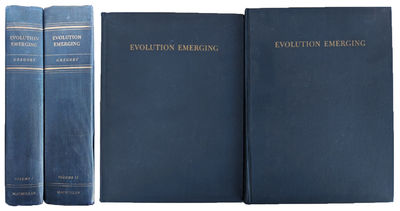 by GREGORY, William King (1876-1970).
New York:: Macmillan, 1951., 1951. 2 volumes. Tall 8vo. xxvi, 736; vii, [1], 1013, [1] pp. Frontis., profusely illustrated, indexes. Navy gilt-stamped cloth; some soiling to fore-edge. Ownership signature of A. N. Dusenbury Jr. Near fine. First edition of this extensively illustrated examination of evolution as it manifested in a variety of species, from apes to mollusks. He was a proponent of evolutionary theory and applied this to all manner of skulls and bones, mammals, fish, etc. Even so, this massive work was the author's extension of the collaborative work being done at the AMNH with professors Henry Fairfield Osborn, Brashford Dean and others. William King Gregory (1876-1970), primatologist, vertebrate paleontologist, and ichthyologist, Curator of the American Museum of Natural History, and Professor of Zoology, Columbia University. "Gregory served the AMNH for forty-four years, retiring as chairman and curator of its depts. of Fossil Fishes and of Comparative Anatomy and Ichthyology--the first individual at the AMNH to hold two curatorships. Gregory was also professor of Vertebrate Paleontology at Columbia, having earlier arranged the New York Academy of Sciences library for Professor Bashford Dean. This led to to the editing of Henry Fairfield Osborn's paleontological papers, and the development of the AMNH journal (later Natural history). Gregory's particular interest was the evolution of mammals, fishes and primates. He investigated the comparative anatomy of the muscles of vertebrates; evolution of the motor apparatus from fishes to humans; evolution of the jaws, teeth and skull; comparative anatomy of anthropoid apes and humans; evolution of the skulls of fishes; and the history and relationships of fishes in geologic time. Gregory did some collecting in the Western U.S. and, with Henry C. Raven, in Australia in 1921 and 1922. In 1925 he accompanied (Charles) William Beebe on the Arcturus to the Sargasso Sea. Gregory made two trips to Africa: in 1929, a Columbia-AMNH expedition to Central Africa collected adult gorillas for anatomical study; and in 1938 the Gregory-Hellman Transvaal Expedition to South Africa studied Australopithecus africus, discovered by Robert Broom. Gregory's work was primarily involved with teaching, research and exhibition planning; he also published over 360 works, including articles, books and monographs." – AMNH Papers. See: A.S. Romer, William King Gregory. 1876-1970, Anatomical Record, Sept. 1971, vol. 171(1): pp.128-9; George Gaylord Simpson, William King Gregory 1876–1970 [obit.], American Journal of Physical Anthropology, Sept. 1971. (Inventory #: RW1093)
$95.00 add to cart Available from
Jeff Weber Rare Books
Share this item

The Operations in Surgery: of Mons. Le Dran ... Translated by Mr. Gataker, surgeon. With remarks, plates of the operations, and a sett of instruments, by Mr. Cheselden ...

London: : Printed for Hawes Clarke and Collins, J. Dodsley, W. Johnston, B. Law, and T. Becket, 1768. , 1768
(click for more details about The Operations in Surgery: of Mons. Le Dran ... Translated by Mr. Gataker, surgeon. With remarks, plates of the operations, and a sett of instruments, by Mr. Cheselden ...)
View all from this seller>