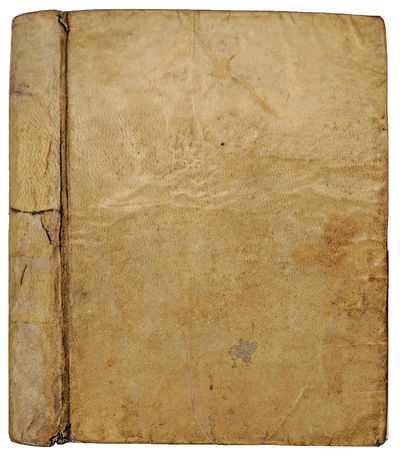 by GASSENDI, Pierre (Petro Gassendo) (1592-1655).
The Hague:: Adrian Vlacq, 1655., 1655. Sm. 4to. [viii], 300, [16] pp. Engraved frontis. portrait (facing p.1), index. Title printed in red and black. Original vellum. Early two-line ink inscription facing title, "in an old hand", so-to-speak. Minor pencil marginalia throughout. Very good. Third and most complete edition. A tremendously important biography of Nicolas-Claude Fabri de Peiresc by the Astronomer and biographer Pierre Gassendi, who Peiresc supported financially from 1634-1637. Peiresc was an accomplished astronomer himself, scientist politician and a brilliant collector, corresponded with Galileo and Tommaso Campanella, both of whom he defended when they were arrested by the inquisition. "Through this book Peiresc and his work came to be known to many who had neither visited his collections and library . . . nor exchanged letters with him" – DSB. An English translation, titled The Mirrour of True Nobility and Gentility: Being the Life of the Renowned Nicolaus Claudius Fabricius, Lord of Pieresk, Senator of the Parliament at Aix, was released in 1657. Gassendi, apart from his significant researches in the field of astronomy, wrote a number of biographies and philosophical texts, and was a frequent opponent of Descartes, with whom he disagreed on the possibility of certain knowledge. (Inventory #: RW1087)
$1,200.00 add to cart Available from
Jeff Weber Rare Books
Share this item