THE DAY OF THE TRIFFIDS 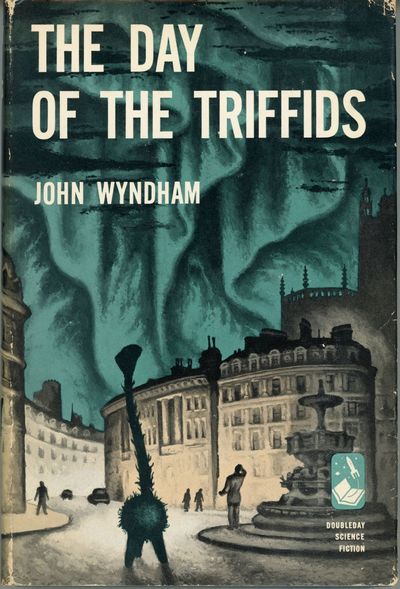 by Wyndham, John (pseudonym of John Beynon Harris)
Garden City: Doubleday & Company, 1951. Octavo, cloth. First edition. Preceded the British edition that has textual differences. Biologically engineered sentient plants raised for food, that walk, sting and feast on carrion, prey on mankind after most humans are blinded by malfunctioning secret military satellites orbiting the earth. "... compares favorably to H. G. Wells' catastrophe novels, especially with THE WAR OF THE WORLDS, to which it bears some striking resemblances." - Magill (ed), Survey of Science Fiction Literature, p. 506. "This tale of monsters from a botched experiment marching over the world is a superior example of its breed." - Anatomy of Wonder (2004) II-1296. Runner-up for the 1952 International Fantasy Award. Basis for two films, a feature in 1962 and a made for television movie in 1981. Anatomy of Wonder (1995) 3-199. Clarke, Tale of the Future (1978), p. 86. Pringle, Science Fiction: The 100 Best Novels 5. Survey of Science Fiction Literature I, pp. 502-07. A fine copy in very good or better dust jacket with light wear at spine ends and corner tips and internal age-darkening with just a hint of show through on spine panel. The jacket presents well overall. (#162295) (Inventory #: 162295)
$1,000.00 add to cart or Buy Direct from L.W. Currey
Share this item
L.W. Currey Inc.
Offered by