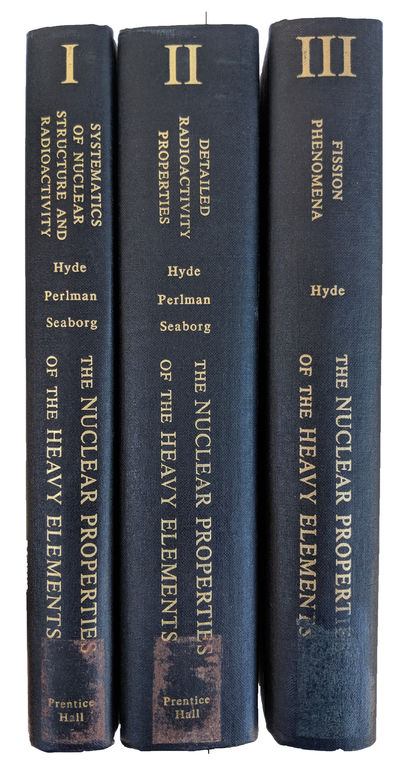 by HYDE, Earl K.; PERLMAN, Isadore (1915-1991); SEABORG, Glenn T (1912-1999).
Englewood Cliff, NJ:: Prentice-Hall, 1964., 1964. 3 volumes. 8vo. xv, [3], 407, [1], xvii, [1]; xvi, [409]-1107, [1], xlix, [1]; xviii, [2], 519, [1], xxiv pp. Figs., index. Black gilt-stamped cloth. Rubberstamps of Dow Chemical Company Library, Rocky Flats Division. Near fine. "An authoritative comprehensive reference work on the nuclear properties of the chemical elements having an atomic number of 82 or greater. Heavy element instability, atomic masses, disintegration energies, systematics, nuclear models, complex spectra and kinetics of alpha emission, and methods of synthesis are covered in vol. I. The topics of vol. II are natural radioactivity of the heavy elements, artificially prepared series, and preparation and properties of each isotope of elements 82 through 103. Vol. III is divided into two parts: fission phenomena at (1) low energy and (2) moderate and high energy. Topics include fission theory; distribution of charge and energy; prompt and delayed neutron emission; and fission induced by charged particles, mesons and photons. Extensive tabular and graphical presentation of data and references to original literature are given throughout the three volumes." - Source Material for Radiochemistry, By the National Research Council (U.S.). Committee on Nuclear Science, Washington, D.C., National Academy of Sciences, 1970, (p. 21). All three authors played key roles in the Manhattan Project. Seaborg shared the Nobel Prize in Chemistry in 1951. Hyde was one of seventy scientists and workers at the Met Lab to sign the Szilard Petition, a document written by Leo Szilard petitioning President Truman to avoid dropping the atomic bombs on Japan. (Inventory #: RW1131)
$145.00 add to cart Available from
Jeff Weber Rare Books
Share this item