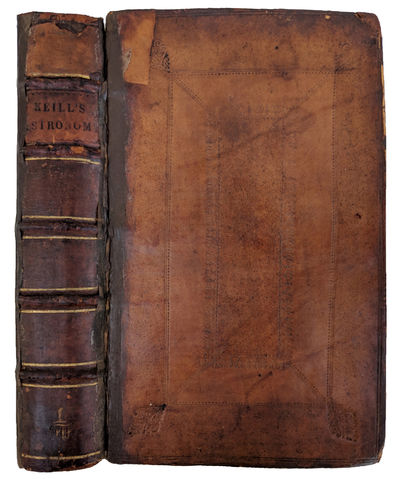 by KEILL, John (1671-1721).
London:: Bernard Lintot, 1721., 1721. 8vo. [viii], xv, [1], 396, [12] pp. Title vignette, 28 folding engraved plates [numbered 1-26, with pls. 17 & 18 misnumbered and 2 added unnumbered plates of the Moon inserted at pp. 108-109], index. Original blind-stamped calf, raised bands, small ownership initial stamp at foot of spine [possibly "TR"]; joints repaired with kozo. Ownership inscription of Thomas Roby, 1723; Greek inked inscription, with date 1734, stamped initials "PG". Very good. First edition in English, translated from the Latin, Introductio ad veram astronomiam, Oxford, 1718; a second edition was issued in 1730, reaching a fifth edition in 1760. ". . . consisting of his Savilian lectures, gives a sketch of the history of astronomy, and he reprinted it in English with many emendations, at the request of the Duchess of Chandos, in 1721." – DNB X, p. 1199. "Keill was one of the very important disciples gathered around Newton who transmitted his principles of philosophy to the scientific and intellectual community, thereby influencing the directions and emphases of Newtonianism. As one of the few around Newton with High Church patronage, Keill apparently tried to counter the Low Church influences of such spokesmen as Richard Bentley and William Whiston. . . Keill's work offered itself to Newton as an alternative Newtonian theology, different from that of the Low Church disciples. Newton's public acceptance of Keill's basic criticism against "world-making" was incorporated in 1706 in what was to be the famous Query of the Opticks." –Dictionary of Scientific Biography. The subject of the lectures includes "Of the Solar Spots. Of the Rotation of the Sun and Planets round their Axes: And of the fixed Stars", "Of the Motions of the three superior Planets, Mars, Jupiter and Saturn, and the Appearances arising from them", "Of the Projection of the Moon's Shadow on the Disk of the Earth", "Of Visible and Apparent Motion", "Of the Apparent Motion which arises from the Motion of the Spectator, or Observer", "Of the System of the World", "In which is proved that the System Explained in the former Lecture, is the true System of the World", "Of the Magnitude and Order of the fixed Stars. Of the Constellations, Catalogues of the Stars, and the Changes to which they are liable", "Of the Motion of the Earth round the Sun: And also about her own Axis, whereby the Apparent Motion of the Sun and Heavens are explained", "Concerning several other Phaenomena or Appearences [sic], which depend on the Motion of the Earth", "Of the Division of Time, and its Parts", "Of the Equation of Time", "Of the Theories of other Planets", etc. REFERENCES: Barchas 1139 [1730 ed.]; ESTC T37367; Wallis, Newton 103.172; Wellcome III, p. 381. (Inventory #: RW1138)
$1,200.00 add to cart Available from
Jeff Weber Rare Books
Share this item