Tracts on Mathematical and Philosophical Subjects; . . ., the Theory of Bridges,. . . Also the Results of Numerous Experiments on the Force of Gunpowder, with Applications to the Modern Practice of Artillery. [3 volumes]. 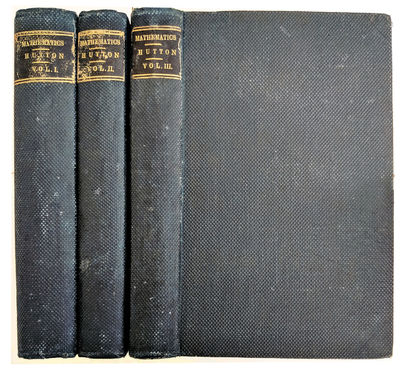 by HUTTON, Charles (1737-1823).
London:: F. C. and J. Rivington, 1812., 1812. 3 volumes. 8vo. x, [2], 485, [1]; [iv], 384; [iv], 383, [1] pp. 9 plates, figs., tables. Original dark green publisher's cloth, leather gilt-stamped spine labels; spine labels slightly chipped, sporadic foxing. Ownership inscriptions of "Robert Lloyd Tilghman, Monday 24th October 1864, Easton Md." Near fine, a choice copy. First edition. These volumes collect many of the writings of English mathematician and surveyor Charles Hutton, who was a prolific writer of scientific articles on a variety of subjects, mostly relating to applied mathematics. "Hutton was an indefatigable worker and his mathematical contributions, if unoriginal, were useful and practical. Throughout his life, he contributed assiduously to scientific periodicals through notes, problems, criticism, and commentary. He wrote textbooks for his pupils in Newcastle and the cadets at Woolwich; edited a great many almanacs, including the Ladies' Diary (1773-1818); and compiled several volumes of mathematical tables." – DSB, Tracts include "The Principles of Bridges," "Queries concerning London-bridge, proposed in the year 1746, by the Magistrates of the City," "On the Common Sections of the Sphere and Cone," "Determination of the Air's Resistance to Bodies in motion, as determined by the Whirling Machine," "On the Theory and Practice of Gunnery, as dependent on the Resistance of the Air," "History of Algebra in all Nations," "Calculations to ascertain the Density of the Earth." PROVENANCE: Robert Lloyd Tilghman [Jr.], was born to a very wealthy family who owned Hope House, a mansion in Talbot County, Maryland, near Easton, Md. [FULL TITLE: Tracts on Mathematical and Philosophical Subjects; Comprising, among numerous important articles, the Theory of Bridges, with Several Plans of Recent Improvement. Also the Results of Numerous Experiments on the Force of Gunpowder, with Applications to the Modern Practice of Artillery.] (Inventory #: RW1127)
$875.00 add to cart Available from
Jeff Weber Rare Books
Share this item