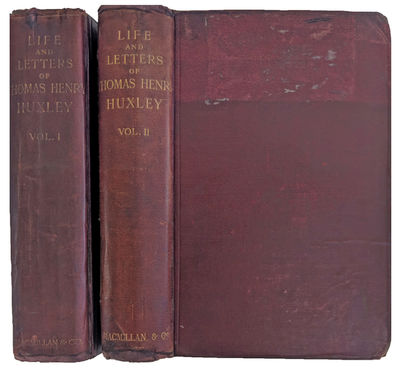 by HUXLEY, Thomas Henry (1825-1895); HUXLEY, Leonard (1860-1933).
London:: Macmillan, 1900., 1900. 2 volumes. 8vo. viii, [2], 503, [5]; vi, [2], 504, [4] pp. Frontis. portraits, 10 plates, index. Maroon gilt-stamped cloth; spine-ends worn, joints split. Ownership signature of "Richard Gompertz, April 1906" and another, "J.M.Mo. Whatram[?]". Good. Mixed state: first edition [vol. I], reprinted [vol. II], 1900. T. H. Huxley was, next to Darwin, perhaps the most important proponent of evolution in the 19th century. His 1860 debate with Samuel Wilberforce was a pivotal moment in a popularization of Darwin's theories. Leonard Huxley, his son and biographer, was something of a genealogical middleman — although a respected biographer in his own right, Leonard was the son of one of the most famous scientists of the 19th century, and the father of one of the 20th century's most famous authors (Aldous Huxley) and a Nobel Prize-winning physiologist (Andrew Huxley). EXTRA POSTAGE MAY APPLY. (Inventory #: RW1129)
$20.00 add to cart Available from
Jeff Weber Rare Books
Share this item

The Operations in Surgery: of Mons. Le Dran ... Translated by Mr. Gataker, surgeon. With remarks, plates of the operations, and a sett of instruments, by Mr. Cheselden ...

London: : Printed for Hawes Clarke and Collins, J. Dodsley, W. Johnston, B. Law, and T. Becket, 1768. , 1768
(click for more details about The Operations in Surgery: of Mons. Le Dran ... Translated by Mr. Gataker, surgeon. With remarks, plates of the operations, and a sett of instruments, by Mr. Cheselden ...)
View all from this seller>