A New System of Universal Geography; or, An Authentic History and Interesting Description of the Whole World, and its Inhabitants . . . Empires, Kingdoms, States, Republics, and Colonies, of Asia, Africa, America, and Europe. . . with Remarks on the Use of Globes, . . . [2 volumes]. 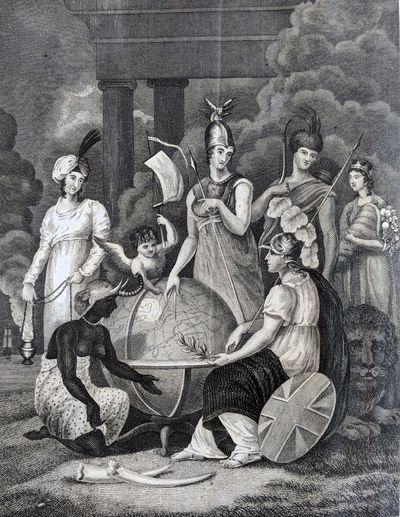 by KELLY, Christopher.
London:: Thomas Kelly, 1829., 1829. SPLENDID ENGRAVED MAPS & PLATES. Two volumes. Folio in 2s. [4], xx, [5]-774; [2], 1105, [1] pp. 2 engraved frontispiece plates in each vol., 1 frontis. folding engraved atlas of the world in each vol., 89 engraved plates including maps (many large folding) & scenes, index; light foxing, final blank torn (vol. II). Original full tree calf, gilt spines, gilt-stamped black calf labels; joints split, extremities rubbed. Very good. EARLY EDITION of this monumental survey of the world in a beautiful period tree-calf binding. Encompassing all areas of science, history, anthropology and geography, this extraordinary work attempts to capture the totality of human endeavor, and discovery. Richly illustrated with 95 engraved plates including many large folding maps, and scenes including: London from Waterloo Bridge, Stonehenge, Trajan's Column, ruins of Athens, the Copernican solar system, an armillary sphere, an offering before Captain Cook, Niagara Falls, the pyramids of Egypt, Rome, Paris, Edinburgh, Glasgow, Dublin, and many more. REFERENCES: BMC (Microprint edition), vol. 13, p. 1107. [FULL TITLE: A New System of Universal Geography; or, An Authentic History and Interesting Description of the Whole World, and its Inhabitants: Comprehending a Copious and Entertaining Account of all the Empires, Kingdoms, States, Republics, and Colonies, of Asia, Africa, America, and Europe; as Consisting of Oceans, Continents, Islands, Promontories, Capes, Bays, Peninsulas, Isthmuses, Gulphs, Lakes, Rivers, Canals, Harbours, Mountains, Volcanoes, Deserts, &c. with Their Respective Situations, Extent, Latitude, Longitude, Boundaries, Climate, Air, Soil, Metals, Minerals, Vegetable Productions, and Every Curiosity, Natural and Artificial, Worthy of Notice Throughout the Face of Nature, Both by Land and Water. Likewise, An Exact Account of the Population, Military and Civil Governments, Revenues, Laws, Trade, Commerce, Arts, Sciences, Manufactures, Agriculture, Religion, Customs, Language, manners, Genius, Habits, Ceremonies, Amusements, and General Character and Pursuits of the Various Nations of the Earth. Including, Details of the Most Remarkable Battles, Sieges, Sea-Fights, and Revolutions, that have Taken Place in Different Parts of the Habitable Globe. With Faithful Accounts of all the new Discoveries that have Been Made by the Most Celebrated Navigators of Various Nations, from Columbus, the First Discoverer of America, to the Death of the Renowned Captain Cook, and Those Who Have Succeeded him, to the Present Time. Also, Interesting Extracts from the Most Authentic Narratives of Modern Travellers, and the Missionaries who have Been Sent Out by Different Societies; Forming a Complete Collection of Voyages and Travels, Illustrative of the Present State of the Known World. To Which will be Subjoined, a Useful Compendium of Astronomy, with Remarks on the Use of Globes, &c. The Whole Concluding with a Copious Index, upon a Plan Entirely New, and Designed to Form a General Gazetteer of the World. [2 volumes].] (Inventory #: RW1140)
$1,200.00 add to cart Available from
Jeff Weber Rare Books
Share this item