The Orbs of Heaven, or, the Planetary and Stellar Worlds. 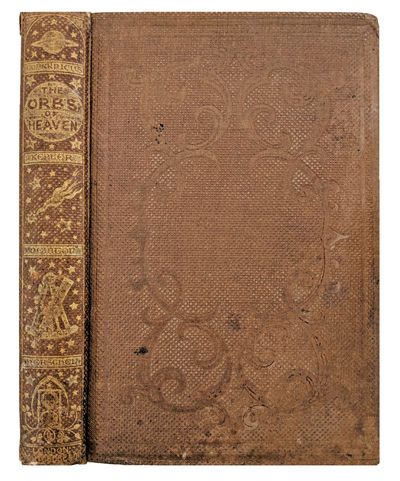 by MITCHELL, Ormsby MacKnight [alternately McKnight Mitchell] (1810-1862).
London:: Routledge, Warne, and Routledge, 1860., 1860. Sm. 8vo. viii, 304, [8] pp. Engraved frontis., half-title, 9 color blue-printed plates, figs., 6 additional blue-printed plates at rear depicting nebulae. Original brown blind- and gilt-stamped cloth. Ownership signatures of Mrs. Jay, Winterslow [nr. Salisbury, U.K.], and Henry E. Ravenhill, Buchland Newton, embossed stamps of Ellis Bookseller, Sherborne. Very good. "New Edition, with numerous illustrations." First issued in 1851 which was issued with 6 pls., not the 15 total in the present 1860 printing), thus this has added plates that enhance this edition. While primarily known as an astronomer and the builder of the Cincinnati Observatory, Mitchell also lectured in mathematics and philosophy, and studied law (he was instrumental in establishing Cincinnati College's law school). A graduate of West Point, where he was a classmate of Robert E. Lee, Mitchell served as a Major General in the Union Army during the Civil War. (Inventory #: RW1181)
$60.00 add to cart Available from
Jeff Weber Rare Books
Share this item