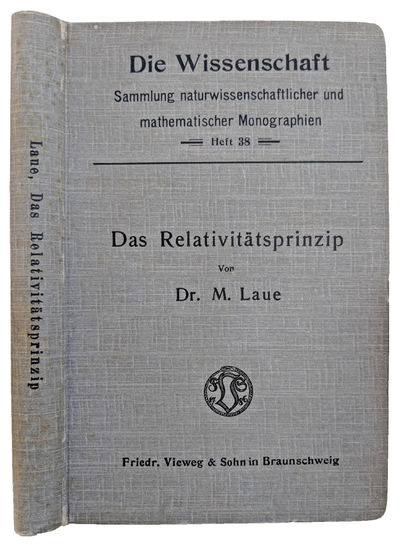 by LAUE, Max Theodor Felix von (1879-1960).
Braunschweig:: Friedrich Vieweg & Sohn, 1911., 1911. Series: Die Wissenschaft (Braunschweig, Germany), 38. Heft. 8vo. [2], x, 208, [38] pp. 14 figs., index. Original gray black-printed cloth. Near fine. First edition. Von Laue won the Nobel Prize in Physics in 1914. "Einstein's special theory of relativity dispensed with the addition or subtraction of the velocities, hitherto assumed to be self-evident, and applied instead a special "addition theorem." In 1907 Laue demonstrated that this theorem readily yields Fizeau's formula with the previously enigmatic Fresnel drag coefficient: u= c/n ± v(1 – 1/n2). Laue thereby furnished Einstein's theory with an important experimental proof, which, along with the Michelson-Morley experiment and arguments from group theory, contributed to early acceptance of the theory. Having thus proved himself an expert in relativity theory, in 1910 Laue wrote the first monograph on the subject. He expanded it in 1919 with a second volume on the general theory of relativity; the work went through several editions." – DSB VII, p. 51. (Inventory #: RW1155)
$90.00 add to cart Available from
Jeff Weber Rare Books
Share this item