The Book of Mars. 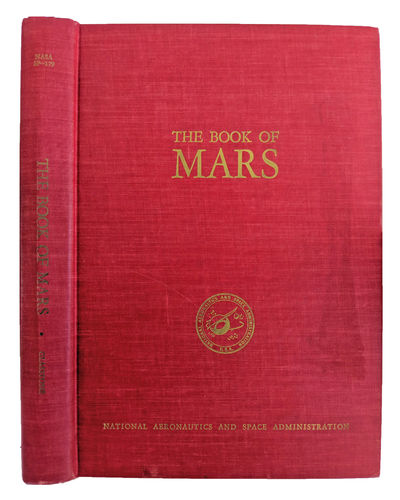 by [Mars] GLASSTONE, Samuel (1897-1986).
Washington, D. C.:: Office of Technology Utilization, National Aeronautics and Space Administration [NASA], 1968., 1968. Series: NASA SP-179. 8vo. vi, [2], 315, [1] pp. Color frontis., figs., index. Red gilt-stamped cloth. OWNERSHIP SIGNATURE OF NORMAN HOROWITZ. Fine. SIGNED BY THE DESIGNER OF NASA'S EXPERIMENTS TO TEST FOR LIFE ON MARS BY THE VIKING LANDER IN 1976. This work anticipated (by nine years) the work of Norman Horowitz who was responsible for the experiments carried out by the Viking Lander of 1976, the first U.S. mission to successfully land an unmanned probe on the surface of Mars. PROVENANCE: This was the personal copy of Norman Horowitz (1915-2005), who was a geneticist at Caltech who achieved national fame as the scientist who devised experiments to determine whether life might exist on Mars. (Inventory #: RW1176)
$175.00 add to cart Available from
Jeff Weber Rare Books
Share this item