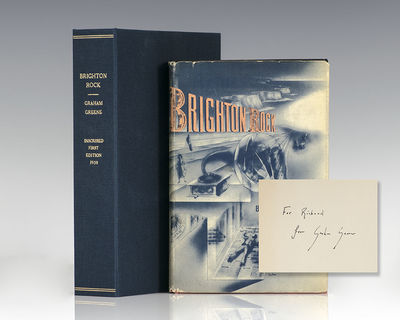 by Greene, Graham
New York: The Viking Press, 1938. First American edition, preceding the British edition by one month of Greene's chilling expose of violence and gang warfare in the pre-war underworld is a classic of its kind. Octavo, original cloth. Presentation copy, inscribed by the author on the front free endpaper, "For Richard Graham Greene." Near fine in near fine dust jacket with light rubbing and wear. Jacket design by George Salter. Housed in a custom clamshell box. First editions signed and inscribed are scarce "Here the probing is carried further in a brilliant and uncompromising indictment of some of the worst aspects of modern civilization, showing us the hard-boiled criminal mind not as a return to savagery but as a horrible perversion of cerebration" (The New York Times). It is the basis for the 1947 film directed by John Boulting and starring Richard Attenborough as gang leader Pinkie Brown and the 2010 film, which stars Sam Riley, Andrea Riseborough, Andy Serkis, John Hurt, Sean Harris and Dame Helen Mirren. (Inventory #: 98352)
$9,500.00 add to cart or Buy Direct from
Raptis Rare Books
Share this item