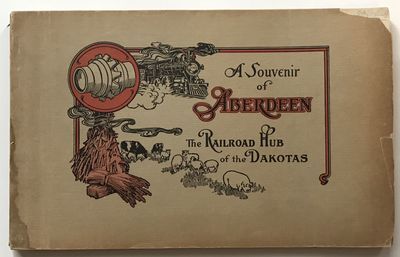 by [South Dakota]
Aberdeen, S.D., 1907. Very good.. [162]pp., with numerous photographic reproductions. Oblong octavo. Original pictorial wrappers. Wraps with light wear and a few small chips. Scarce promotional for the town of Aberdeen, South Dakota, located in the northeastern corner of the state. Known as "the Hub City of the Dakotas," Aberdeen was a confluence of four railroad lines, which supported a burgeoning population and business boom. The town, its residences, businesses, railroads, artesian wells, and municipal buildings are all extensively illustrated, together with portraits of local officials. Today, only one railroad line travels through Aberdeen, but it remains the third most populous city in the state (population a whopping 28,000), after Pierre and Sioux Falls. We locate copies at New York Public, California State Library, SMU, and four more in South Dakota. (Inventory #: 508)
$600.00 add to cart Available from
McBride Rare Books
Share this item

Chicago : South and West Land Company , 1906
(click for more details about The Famous Rhea Pasture Bovina, Texas Just Opened for Settlement. The Last of the Great Prairie Farming Lands)
View all from this seller>