This Is a Response to Adkins' Campaign of Hate [caption title] 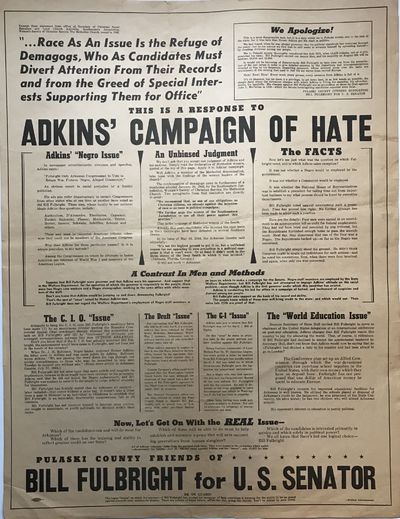 by [Arkansas]
Little Rock, 1944. Very good.. Printed broadside, 22.5 x 17 inches. Light, even tanning. An unrecorded political broadside from the 1944 Arkansas Senate race between Homer Adkins and William Fulbright. Adkins was a member of the Klan, who financed his early political victories, and their unsavory views remained a hallmark of his political goals. Fulbright defeated Adkins in this race, and went on to remain in the Senate for six full terms. The text reads, in part, "Race as an issue is the Refuge of Demagogs [sic], who as Candidates must divert Attention from their Records and from the Greed of Special Interests supporting them for Office," and contains an exposition on the various issues related to racial hatred advanced by the Adkins campaign. Not located by OCLC. (Inventory #: 518)
$675.00 add to cart Available from
McBride Rare Books
Share this item