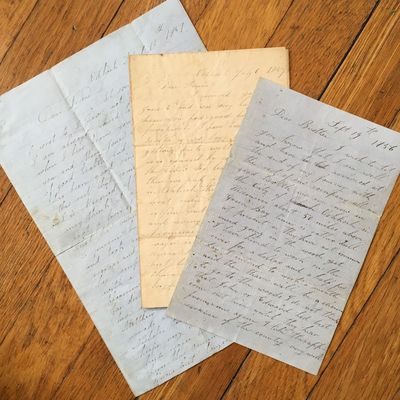 by [Wisconsin]. Upton, James; Doyle, Matthew
Oshkosh, 1857. Very good.. Three letters, [10]pp. total. Scattered browning and staining, minor tears and fading at few of the folds, penmanship practice or doodles on two rear blanks. A wonderful group of three letters, illuminating the continual push westward for economic opportunity and the development of the lumber industry in Wisconsin, one by Matthew Doyle (23 years old), and two by James Upton (32 years old), friends from Aroostook, Maine, written to family back east between the few years following the 1853 incorporation of Oshkosh, and the establishment of the rail system in 1859. The men, working on the river and as lumber men, write about going "into the woods", crop conditions, and note the dramatic increase in population, buildings, and sawmills. Doyle writes: "I have hired to work on the river for a dollar and a half per day. I intend to work a month and then there will be a chance to go to the woods." He suggests that his brothers do not follow until he can check out more on the land situation, as "I like the appearance of the country very well, It appears to be a fine farming country, but the land is all entered in this part of the country and there is no state land as I can hear of within 50 or 60 miles over toward the Mississippi." But in any case he reports that Oshkosh is booming: "The country round here is very low and level, principally heavy oak openings. Oshkosh is situated near a large lake and is a great business place. There is about 15 steam sawmills and a great deal of other works, with a population of 10 thousand inhabitants. And ten years ago, there was not a house here. There was 500 buildings put up this summer and the place seems to be in a flourishing condition." Upton, the older of the two, writes a year later after he has married: "I can do very well here, but I may go to Kansas if accounts continue favorable from there as there is always a better claim for a poor man to make a name in a new country than an old one. This is a good farming country, but land is very high." Two months later he continues: "The weather is fine and crops look well and everything seems to promise a good year. Wages is fair but money scarce. It seems to be the best time for farmers for there is quick sale and high prices for all their produce. The fact is that a man that owns 40 acres of good land in this country, he is well off....It seems that some of our Aroostook folks does not think much of the west, but I have never found any great difficulty to get along. I have agreed to go in the woods and stay till spring for $40 per month....I do not think I could content myself to live on Aroostook." He ends by suggesting that his brother, who has had a failed affair come out here where "he can't fail to please himself in the choice of a dutch girl for there is any quantity of them here. (Inventory #: 356)
$650.00 add to cart Available from
McBride Rare Books
Share this item