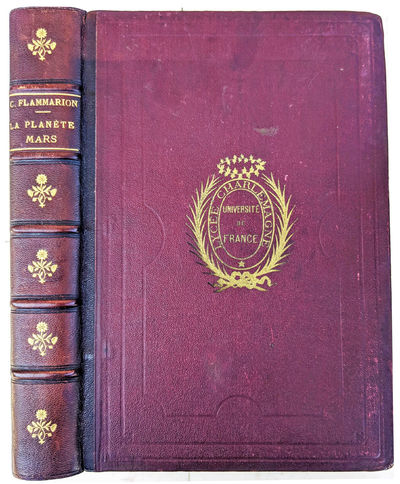 by FLAMMARION, Nicolas Camille (1842-1925).
Paris:: Gauthier-Villars, 1892., 1892. 4to. x, 608 pp. 580 illustrations, including photos & telescopic images, 23 maps (2 color). Contemporary quarter maroon morocco, gilt spine, raised bands, gilt & blind-stamped cloth boards, Lycee Charlemagne binding. PROVENANCE: Early pencil ownership signature of Rene Hayaux du Tilly, Oct. 1948 (1912 - 1998). Near fine. Rare. First edition. This monumental work offers a compilation of all known observations of Mars since 1636. A rich & readable study of combined human knowledge of Mars, replete with illustrations and photographs, and enhanced by several maps (of which two are color). A second volume was issued in 1909. Flammarion was a distinguished writer and astronomer whose special interest was Mars, and in this work he seriously approaches the question of whether there is life or even civilization on Mars. A rare but key publication in the history of Mars. DSB V. "In 1892, [Flammarion] published La planete Mars et ses conditions d'habitabilite, a compilation and synthesis of all that had been written and conjectured about the planet since 1636. (A second edition appeared in 1909.) Flammarion accepted the maritime view of Mars in which the dark areas were seas and the light areas continents. The orange red hue of the latter suggested a sterile, sandy environment. But, he argued, was it possible to 'condemn a world to a fate of this kind' when all the elements of life are abundantly evident? Accordingly, he attributed the baleful color to vegetation." – Hockey, Biographical Encyclopedia of Astronomers, Vol I., pp. 372-373. (Inventory #: RW1426)
$1450.00 add to cart Available from
Jeff Weber Rare Books
Share this item