A Waif Of The Plains. 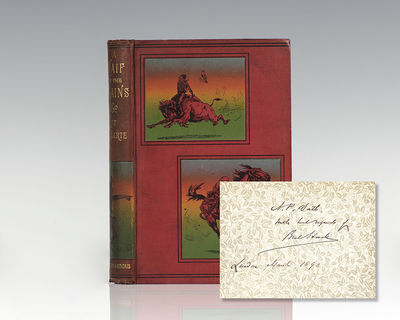 by Harte, Bret
Piccadilly: Chatto & Windus, 1890. First edition of this Western novel by Harte. Octavo, original illustrated cloth, patterned endpapers, frontispiece with tissue guard, with sixty illustrations by Stanely L. Wood. Presentation copy, inscribed by the author in the year of publication on the front free endpaper, "A.P. Watt with best regards of Bret Harte London, March 1890." In near fine condition. From the collection of Los Angeles bibliophile Michael Sadleir with his bookplate to the pastedown. An exceptional example. Bret Harte was an American author and poet, best remembered for his short fiction featuring miners, gamblers, and other romantic figures of the California Gold Rush. In a career spanning more than four decades, he wrote poetry, fiction, plays, lectures, book reviews, editorials, and magazine sketches in addition to fiction. As he moved from California to the eastern U.S. to Europe, he incorporated new subjects and characters into his stories, but his Gold Rush tales have been most often reprinted, adapted, and admired. (Inventory #: 96088)
$500.00 add to cart or Buy Direct from
Raptis Rare Books
Share this item