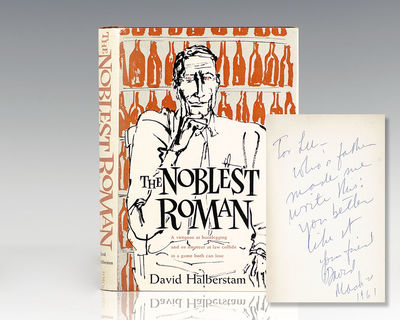 by Halberstam, David
Boston: Houghton Mifflin Company, 1961. First edition of Halberstam's first book. Octavo, original cloth. Presentation copy, inscribed by the author on the front free endpaper in the year of publication, "For Lee - who's father made me write this: you better like it your friend David Halberstam March 20 1961." The recipient, Lee Stout, was the son of Halberstam's editor at Houghton Mifflin, Glen Stout. Near fine in a near fine dust jacket. Jacket design by Eric von Schmidt. American journalist and historian David Halberstam became best know for his work on the Vietnam War, the Civil Rights Movement, and later, sports journalism. The Noblest Roman was published during Halberstam's later years when he transitioned from sportswriting to historical fiction. (Inventory #: 96153)
$1250.00 add to cart or Buy Direct from
Raptis Rare Books
Share this item