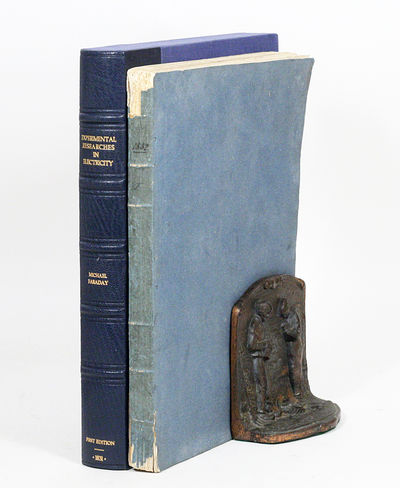 by FARADAY, MICHAEL
London: Richard Taylor, 1832. First edition. Original Wrappers. FIRST EDITION IN ORIGINAL WRAPPERS OF MICHAEL FARADAY'S MOST FAMOUS AND INFLUENTIAL PAPER, REPORTING THE FIRST PRODUCTION OF ELECTRICITY BY ELECTROMAGNETIC INDUCTION. "Oersted had shown (1820) that an electric current generated magnetism; Faraday, among many, tried for 10 years to generate electricity from magnetism. Towards the end of 1831 a new approach occurred to him and in 10 intensive days he concentrated on successfully accomplishing this and proving that the electricity so generated met all the criteria of real electricity. This he did in a paper read before the Royal Society on November 24, 1831. Electric generation based on electro-magnetic induction was thus discovered and remains the means of generating nearly all the electricity in use today" (Dibner 64).   Faraday's paper on electromagnetic induction was the first in his "Experimental Researches in Electricity" series--a series he would continue throughout his career. In the "Second Series," also included in this collection, Faraday describes (in the prestigious Bakerian Lecture) his famous experiment where, by rotating a copper disc attached with wires between the poles of a horseshoe magnet, he created the first successful production of a continuous and steady direct electric current. This was the first electric generator. (see Printing and the Mind of Man [PMM] 308); Dibner 64.   Experimental Researches in Electricity... Read November 24, 1831, pp. 125-162. WITH: The Bakerian Lecture: Experimental Researches in Electricity, Second Series... Read January 12, 1832, pp. 163-194. In Philosophical Transactions of the Royal Society of London for the year MDCCCXXXII, Part I. London: Richard Taylor, 1832. Quarto, original wrappers; custom half-leather box. "1832" and "I" written in early ink on spine. Wrappers with chipping and splitting to spine ends. Some dampstaining to the plates (including the two Faraday plates) bound at rear. Text pristine. AN EXCEEDINGLY RARE SURVIVAL IN UNRESTORED ORIGINAL WRAPPERS OF ONE OF THE LANDMARK PAPERS IN THE HISTORY OF SCIENCE. (Inventory #: 2224)
$12,000.00 add to cart or Buy Direct from
Manhattan Rare Book Company
Share this item