Menu and Bio - A Luncheon in honor of His Excellency Senor Doctor Don Francisco Castillo Najera, Ambassador Extraordinary and Plenipotentiary of Mexico to the United States 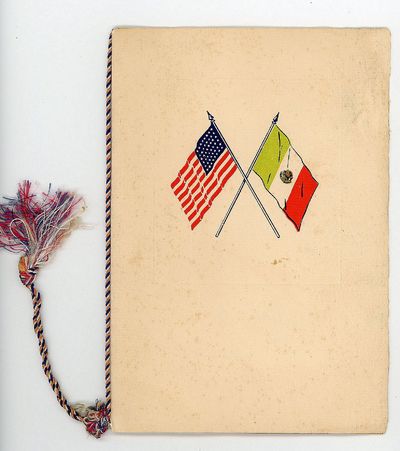 New York, 1943. Francisco Castillo Nájera (25 November 1886 in Durango, Dgo. – 20 December 1954 in Mexico City) was a Mexican diplomat and politician. He was president of the Assembly of League of Nations from 1934 to 1935, ambassador to China and the United States, also as the Dean of the Diplomatic Corps in the last year of his tenure, 1945, and Secretary of Foreign Affairs from 1945 to 1946.. 8pp. Illustrated wraps with crossed United States and Mexican flags. Held in place with red, white and blue tasseled string tie. The event was given by Thomas J. Watson at the Union Club. Includes a full page image from a photograph of the honoree. 4 pp of his biography, focusing on a multitude of honors. The following page is a list of Mexican aviators, graduates of the United States Naval Advance Training Course. The final page is the menu. - a simple three course meal. (Inventory #: 27008235)
$65.00 add to cart or Buy Direct from Eclectibles
Share this item