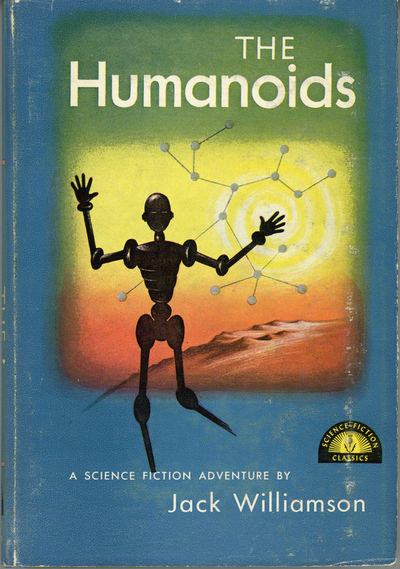 by Williamson, Jack (John Stewart Williamson)
New York: Grosset & Dunlap Publishers, 1950. Octavo, boards. Later edition. Brief signed inscription by Williamson on the front free endpaper along with an adhesive label signed by Williamson affixed above the inscription. New introduction by Groff Conklin. Sequel to Williamson's famous SF horror story, "With Folded Hands" (ASTOUNDING SCIENCE FICTION, July 1947), first published as a three-part serial in ASF in 1948 as "... And Searching Mind." in which man, unfit to be the custodian of his technology, is placed in protective custody by his own mechanical creations who follow their prime directive: "To Serve and Obey, And Guard Men From Harm." John W. Campbell, editor of ASF "wanted a sequel in which the oppression of the humanoids was discovered to be liberation and that, apparently, was what Williamson gave him. But Williamson has said that his sense of the story led him to believe that the humanoids would master parapsychology, too, and that the message of the novel was that the perfect machine was perfectly destructive. But it is not plot alone that explains the power of 'With Folded Hands" and THE HUMANOIDS to move generations of readers, it is the image of the humanoids themselves -- these naked and beautiful perfect servants of humanity whose solicitude is deadly." - James Gunn, SURVEY, p. 985. On the other hand, the overly protective humanoids may be mankind's benefactors, forcing humans to transcend their limits and leave war, violence, and robots behind. Classic 1940s speculative pulp fiction and a fine early treatment of the singularity theme. Anatomy of Wonder (2004) II-1257. Berger, Science Fiction and the New Dark Age, pp. 34-6. Pringle, The Ultimate Guide to Science Fiction, second edition (1995), p. 178. Sargent, British and American Utopian Literature, 1516-1985, p. 237. Survey of Science Fiction Literature II, pp. 981-85. In 333. A fine copy in nearly fine dust jacket with mild rubbing along folds. (#162429) (Inventory #: 162429)
$75.00 add to cart or Buy Direct from L.W. Currey
Share this item
L.W. Currey Inc.
Offered by