Beauty in Exile: The Artists, Models, and Nobility Who Fled the Russian Revolution and Influenced the World of Fashion 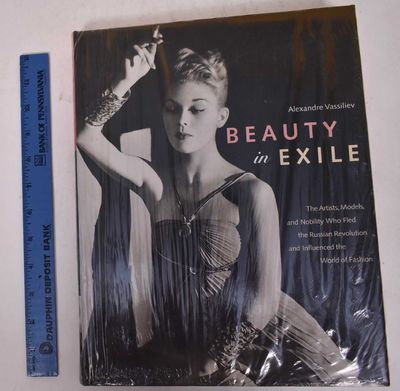 by Vassilievm Alexandre
New York: Abrams, 2000. Hardcover. New.. Cream boards, BW-illustrated dust jacket wtih white, pink, and cream lettering. 480 pp. Illustrations. Trranslated from the Russian by Antonina W. Bouis and Anya Kucharev. "Russians fleeing from the chaos that followed the revolution of 1917 brought with them styles in fashion that led to a craze for Oriental and exotic clothing, decorated with pearls, silks, and embroidery, which influenced Western culture, not only in popular couture, but the costumes worn by performers at the ballet, modern dance and theater, all illustrated here in copious b&w reproductions. Fashion historian and costume and set designer Vasilliev narrates the history of the Russian emigration in Istanbul, Paris, Berlin, and the eastern Russian port of Harbin, before detailing, chapter by chapter, the fashion houses set up by TmigrTs, various cloth designers, Russian handicrafts, and Russian models from WWI into the 1950s." -Amazon. (Inventory #: 170123)
$75.00 add to cart or Buy Direct from Mullen Books
Share this item