A Trip to Freeland [cover title] 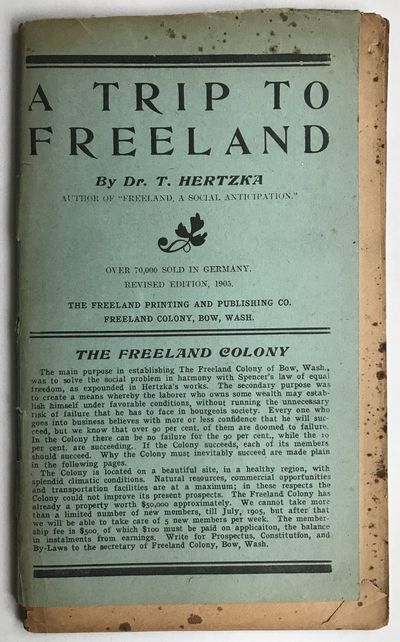 by [Utopias]. Hertzka, Theodore
Bow, Wa: Freeland Printing and Publishing Co, 1905. Very good.. 66pp. Original blue printed wrappers, stapled. Light foxing and soiling, light chipping and wear. Text evenly toned, minor soiling. Noted as the "Revised Edition," this is the first printing of the first American edition, after original publication in German. Published as a prospectus for the Freeland Colony at Bow, Washington. Whidbey Island, Washington -- the first of several (and the only to survive infancy) American communities founded upon the principles outlined in Hertzka's Freeland. The text as here presented eliminates all references to the African continent, where Freeland and its sequel were originally set, perhaps to allay nativist sentiment. The wrappers give a description of the colony, its mission and inspiration, and invite the reader to subscribe to the colony's quarterly newsletter. An unusual Washington imprint, and not often seen in commerce. Not in Miller's American Communes 1860-1960. (Inventory #: 465)
$600.00 add to cart Available from
McBride Rare Books
Share this item